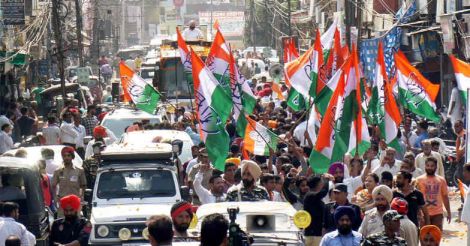 Punjab CM Captain Amarinder Singh during a roadshow on the last day of campaigning for PPCC president and Gurdaspur by-poll candidate Sunil Jakhar in Gurdaspur on Monday. PTI

Gurdaspur, Punjab: The poll campaign for the Gurdaspur Lok Sabha seat, which has witnessed sharp attacks and quick ripostes by leaders of the three major parties - the Congress, BJP and AAP, came to an end Monday.

The Congress, which is ruling Punjab, has fielded its state chief Sunil Jakhar while the BJP has placed its hopes on businessman Swaran Salaria. The Aam Aadmi Party has fielded retired Major General Suresh Khajuria from this seat.

Polling will be held on October 11.

During the poll campaign, the Congress targeted the BJP government at the Centre alleging 'all-round failure' and claiming that the Modi government had ignored farmers' interests while promoting those of corporates.

Congress leaders had also attacked the government over the implementation of the Goods and Services Tax (GST).

The Akali-BJP combine sought votes on the basis of development and welfare schemes started by the Modi government in the last three years while attacking the six-month tenure of the Captain Amarinder Singh led Congress government claiming it had failed to honour polls promises like farm debt waiver.

The BJP targeted Congress candidate Jakhar calling him an 'outsider' and sought to know why Congress Rajya Sabha MP Partap Singh Bajwa was 'missing' from the poll campaign.

Significantly, the campaigning for Gurdaspur bypoll did not see much active canvassing by top national level leaders from any of the three parties.