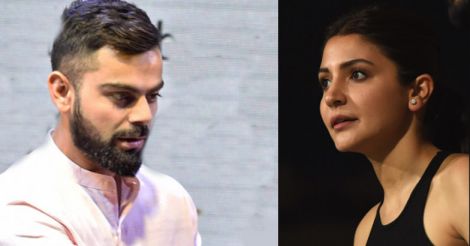 Mumbai: Heroines giving lessons on moral values to public has been the subject of countless movies. But the incident happened for real in Mumbai on Saturday when Bollywood diva Anushka Sharma took a passerby to task when he allegedly threw garbage on the road. And her husband Indian cricket skipper Virat Kohli duly recorded the incident in a video that has now gone viral on social media.

In the 17-second clip, the actor can be seen scolding the man in a chauffeur-driven dark sedan for littering the streets.

"Why are you throwing garbage on the road, you cannot just throw plastic on the streets just like that," Anushka can be heard as saying in the video shared by Kohli on Twitter

She then asks the man to use a dustbin instead of throwing garbage on the streets.

Kohli captioned the clip as: "Saw these people throwing garbage on the road & pulled them up rightfully. Travelling in a luxury car and brains gone for a toss. These people will keep our country clean? Yeah right! If you see something wrong happening like this, do the same & spread awareness. @AnushkaSharma."

Saw these people throwing garbage on the road & pulled them up rightfully. Travelling in a luxury car and brains gone for a toss. These people will keep our country clean? Yeah right! If you see something wrong happening like this, do the same & spread awareness. @AnushkaSharma pic.twitter.com/p8flrmcnba

He further called out people for turning everything on social media into a meme.

"Lot of people who don't have the courage to do something like this find it funny. Everything for people nowadays is meme content. Shame," he wrote in another tweet.

'Anushka was ranting and yelling'

The person, who was admonished by Anushka, went on to criticise the actor for 'ranting and yelling' at him 'like a crazy roadside person'.

The man who identified himself as Arhhan Singh shared a post on Facebook, saying though he is 'apologetic' for his carelessness, the actor could use some etiquette in her speech.

"Horrible! So I happened to carelessly litter a square millimetre of plastic while driving! A car passing by rolls their window down and there we have our wonderful Anushka Sharma ranting and yelling like a crazy roadside person!

"While I'm apologetic for my carelessness, Mrs Anushka Sharma Kohli a little etiquette and politeness in your dialogue wouldn't have made you a lesser star! There are all kinds of manners and hygiene... verbal etiquette is one of them!" he wrote.

Singh added the garbage mistakenly went out of the window of his luxury car.

"(It) was way less then the garbage that came out from your mouth... From your luxury car's window... Or the trashy mind Virat Kohli to shoot and post this online... For whatever gains..." he said.

Anushka is yet to publicly respond to the incident.