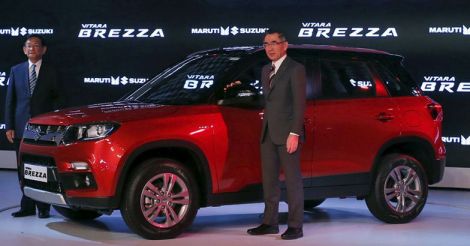 After establishing its dominance in the passenger cars segment, Maruti Suzuki India (MSI) is now leading in the Utility Vehicle (UV) segment too.

Maruti accounted for 28 per cent of UV sales during the period from April 2017 – January 2018, according to a report by Society of Indian Automobile Manufacturers (SIAM).

The carmaker became the top player in the UV segment with its newly launched sub-4-metre car, Vitara Brezza. The model was launched 5 to 6 months back.

The company’s net profit increased to 23% in the first quarter of this fiscal year, riding on the new models, Baleno and Vitara Brezza.

An MSI official said the growth of the company's UV segment had been driven by Vitara Brezza, S-Cross and Ertiga with demand still continuing to be strong as some of the model have weeks of waiting period.

Shares of Maruti Suzuki India on Wednesday ended at Rs 8,713.60 per scrip on BSE, down 0.70 per cent from its previous close.

The Bolero has been the best-selling UV for the past 10 years, but it is struggling in the market with the arrival of Vitara Brezza, followed by Hyundai Creta.