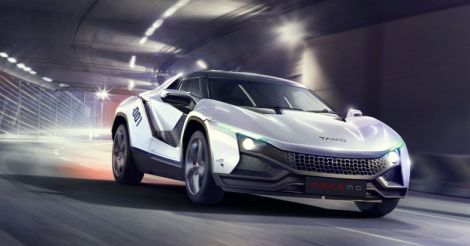 New Delhi: Tata Motors has shelved its ambitious sports car project, RaceMo, which was unveiled with much fanfare at the Geneva international motor show last year.

The RaceMo is among the projects in both passenger vehicles (PV) and commercial vehicles (CV) segments which the company has decided to pull the plug after a review of its capitalisation policy on product development.

"...now we've introduced a new capitalisation gateway in our product approval process on affordability, which means even though if there's a business case that is valid, we'll take it forward only if it meets the affordability gateway," Tata Motors Group CFO P B Balaji told analysts.

The company has made an impairment provision of Rs 1,641.38 crore for quarter ended March 31, 2018 related to under development and capital work-in-progress after reviewing its product development programmes.

"All products or categories that we are not intending to continue further have all been taken in exceptional (items) for Tata Motors," he added.

When asked about details of the shelved projects, a Tata Motors spokesperson said, "The projects are both in CV and PV and include projects like RaceMo in the case of PV, launch of new products in other export markets which we don't intend to proceed further and write-offs taken to release assets that will be redeployed to save cash flows."

Balaji has also stated if Tata Motors could get a good buyer who could invest money in the RaceMo project, the company would consider working together.

When it was unveiled in Geneva last year in March, Tata Motors had planned to sell the RaceMo sports car under TAMO badge. It was proposed to be powered by a rear-mounted 1.2 litre petrol engine delivering 190 PS of power.

Things, however, did not go as planned for the RaceMo when the company under the stewardship of new Tata Group chairman N Chandrasekaran started reviewing projects with a focus on turning around the ailing domestic business.