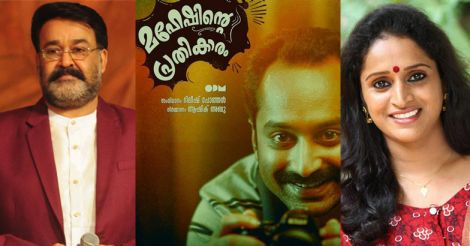 » 344 films from 26 languages considered for the awards

New Delhi: Surabhi Lakshmi was declared the Best Actress for her performance in Minnaminugu during the 64th National Film Awards, which were announced here on Friday.

Bollywood star Akshay Kumar won the Best Actor Award for his portrayal of a patriotic naval officer in Rustom, while Marathi movie Kasaav about depression was declared the best feature film.

Mollywood made big gains as the awards were announced with Mohanlal getting a special jury mention for his performance in Munthiri Vallikal Thalirkkumbol, Janatha Garage and Pulimurugan.

"Extremely happy to be chosen for the award," Mohanlal told reporters.

This is an appreciation for Malayalam cinema: Mohanlal on getting special jury mention | Video

Adish Praveen of Kunju Daivam won the Best Child Artiste award and he shared the honor with two others.

Malayalam movies that made it to the final round were Ottayal Paatha, Pinneyum, Maheshinte Prathikaaram. Kerala state best actor Vinayakan, who wooed audience and critics with his portrayal of Ganga in Kammattipadam, missed out on the top honor.

Director R.S. Vimal was part of the regional jury that picked movies from Malayalam and Tamil. Acclaimed Malayalam director Priyadarshan is the jury chairman of the 64th National Film Awards.

Glory for Bollywood too

The awards, which were spread out in different languages, saw Bollywood movies like Pink, Neerja and Dangal score in key categories.

Rustom, a court room drama directed by Tinu Suresh Desai, is loosely based on the 1959 Nanavati murder case.

Akshay, 49, took to Twitter to express his gratitude over his surprise win.

The actor said Sonam Kapoor, who received a special mention for her role in Neerja, was shooting with him and it was a double celebration for them on the sets of Padman.

Neerja, directed by Ram Madhvani, was named the best Hindi film. It is the 1986 hijacking incident during which flight attendant Neerja Bhanot was killed by terrorists while saving passengers.

Producer Shoojit Sircar dedicated the award to his team and Bachchan, saying it would not have been possible to make the female-centric drama without the actor's support.

Dhanak was named the best children's film, while Telugu movie Sathamanam Bhavathi was chosen as the popular film.

Marathi cinema was a big winner at the awards with Kasaav winning the top award.

"Kasaav got the best film award which is a great thing but another point of happiness is that the film deals with the theme of depression. The award definitely gives a boost to Marathi cinema," co-director Sunil Sukthankar told PTI.

Besides Kasaav, Rajesh Mapuskar won the best director award for his film Ventilator. The movie has been produced by actress Priyanka Chopra and her mother Madhu.

Ventilator also won the best editing and the best final mixed track award. The best adapted screenplay went to Dashakriya, which was also chosen as the best Marathi film, while its actor Manoj Joshi was named as the best supporting actor.