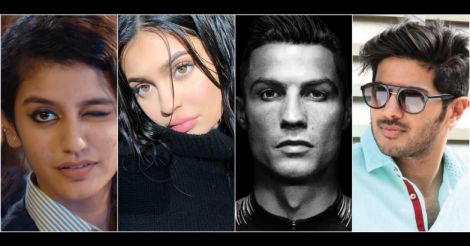 It just took a night, to be more specific a wink, for 18 year-old Keralite girl, Priya Prakash Varrier, to become the new queen of Internet. After Facebook and YouTube, it is time for Instagram to fall for the charm of Priya.

Priya garnered over 606K followers in a single day to become the third celebrity, after popular American model and TV personality Kylie Jenner and footballer Cristiano Ronaldo, to achieve such a feat. Kyle Jenner has 103 mn and Ronaldo is at 120 mn followers respectively.

Thank you for all the love and support💙

The wink in the song 'Manikya Malaraya Poovi', which is currently the top trending video on YouTube, boosted Priya's Instagram follower base to 2.8million.

The 'Manikya Malaraya Poovi', song from the upcoming Malayalam movie 'Oru Adaar Love' directed by Omar Lulu was released on YouTube on Friday. The viral wink also made Priya gain 2.8 million followers on Instagram within a short span of time. She surpassed Mollywood star Dulquer Salmaan, who has a 1.9 million followers.