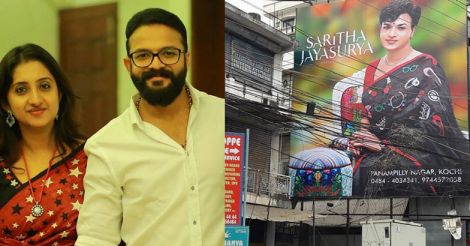 Actor Jayasurya is someone who can pull off any character with all ease. No wonder Malayalam movie buffs call him as Mollywood's 'Leonardo Di Capri'.

As he's all set for the release of his upcoming movie Njan Marykutty directed by Ranjith Sankar, Jayasurya has done something special for his wifey and designer Saritha Jayasurya.

"It would probably be for the first time in history that a husband models for his wife's sari collection in a sari", read director Ranjith Sankar's post. Sharing a photo, Jayasurya's makeover look as a transwoman has been used in the big hoarding of his wife's boutique in Kochi.