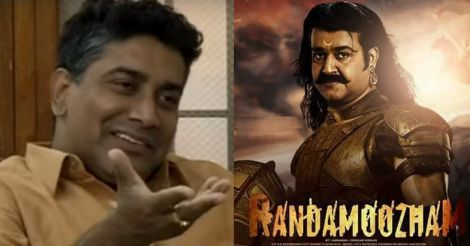 Shrikumar Menon and a fan made poster of the movie

In an exclusive interview with Manorama News, Shrikumar said, ''It will be a film made with Rs 1,000 crore but apart from the huge amount, the movie is expected to be one with class.''

''When I bought Randamoozham's script from MT Vasudevan sir, I signed the contract to make it a film in 15 years. The movie will reach the audience by 2020. The casting has to be done. An international agency will help for it,'' he said.

When asked how he managed to convince MT for such a project, he told Radio Mango: ''He was my father's classmate, both of them were very good friends as well. They used to have discussions of various kinds of writings. When I first expressed my desire to my friends to make Randamoozham a film, they asked me to go ahead and ask MT sir directly''.

On roping in Mohanlal for the project

''As a director, I believe, Mohanlal is the only one who can handle all kinds of emotions that Bheeman has in the script. I have full faith upon him. Before taking the script from MT sir, I had already given my word that Mohanlal will play the role of Bheeman.

''When I first went to meet him, he had lots to say about Mahabharatha, the epic. Later, when I told him that I was ready with a script, he wanted to read Randamoozham first. After reading that, he just asked when we are starting the project.

''Shetty told me that by making this film, we are presenting Indian mythology before the world. India's culture and rich heritage will be presented and that should never be a let down. In terms of look and feel, in terms of utilization, we can't make any kind of compromise. We should do our best to make it into world classic and world should bow down before the Indian mythology.''

Buoyant fans are now awaiting a blockbuster world class movie that can bring an Oscar to India.