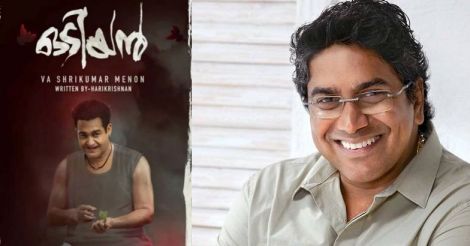 Mollywood is awaiting its most expensive movie to date, Odiyan, directed by V.A.Shreekumar Menon with Mohanlal in the lead. Perhaps this is also Malyalam's most intriguing movie as well.

Who is Odiyan after all? Mohanlal, who is in the lead role in Odiyan left the curious fans spinning saying Odiyan is the 'King of the night' who treads his way forth through the blanket of 'darkness' cast by the lonely night.

But here, director Menon is giving some much awaited sneak-peek into his debut film:

''Odiyan exists at the margins of a curious mix of history and folklore. Odiyan, the dreaded black magician, can nip off a fully grown fetus from a mother's womb with the tip of a bamboo.

A blanket of mystery and fear shrouds the half man- half beast that prawls through the night, with the wand of wicked magic.

Odiyans ruled the nightmarish darkness of the pre-electrification era in Kerala villages. With the lesser mortals shrinking in fear with the fall of darkness, the dreaded black magician could be lurking around anywhere; he could be on the high branches nearby, behind a fence or on those long meandering paths crisscrossing the vast lonely paddy fields.

No man alive today has seen an Odiyan in his lifetime. Yet, the folklore refuses the blasphemy: Odiyan is real!

Odiyan has his unique blessings- a powerful physique, bestial night vision and omnipresence in assorted forms. When electricity brightened even the remote hamlets of Kerala, Odiyans were driven into 'extinction'.

The film is the story of a Palakkad village across 50 years, from 1950-2000, before light drove the 'dark' Odiyans away.

Manikkan is an Odiyan who can race on four legs and crawl through the muddy slippery paddy fields, these being among his several gifts.

Mohanlal shed 15 kilogram to become Odiyan. The well known action choreographer Peter Hein, better known for the celebrated action sequences of Pulimurugan, is training the superstar for this film too. The film covers 65 years of Manikkans life, essaying the different stages of his life.