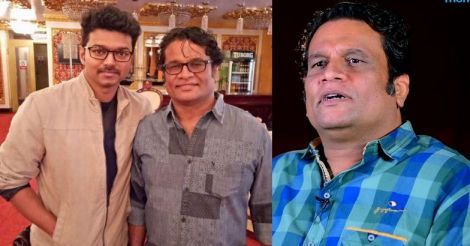 It’s been a spectacular leap for Hareesh Perady as he shines alongside Ilayathalapathy Vijay in the movie, 'Mersal'

He first appeared on the reel as Kaka Sankaran in Kayamkulam Kochunni. From the simple Malayalam show to the flamboyant Mersal, it’s been one spectacular leap for Hareesh Perady as he shines alongside Ilayathalapathy Vijay in the movie. Following a meaty role in the Vijay Sethupathy-Madhavan superhit Vikram Vedha, Perady’s role in Mersal is the talk of the town.

The actor who has made a niche for himself in both Tamil, as well as Malayalam film industries, shares a few interesting filmy tidbits with Onmanorama.

Say something about Vijay

He’s quiet and reserved. He seldom yaps and talks only what he feels is absolutely necessary. He’s very knowledgeable but hardly shows it. Whenever we shoot abroad, dinner done, he goes out of his hotel for a long walk. He asks us to join him. When we realize we’re ambling along with a superstar, we swell with pride, but he has no such airs. He’s simple and unassuming. He talks about his home, Malayalam movies and his experience working with Lalettan. It’s like walking with a close friend. He respects the Malayalam industry. He feels it’s one place where quality films are made.
We completed Mersal in a year. The filming took place in Poland, Austria, and Macedonia.

How about your role in Tamil films?

Andavan Kattalayanu was my first film in Tamil. It was another outing by Manikandan who also directed Kakka Muttai. When he was scouting around for a new face, it was his assistant Sreenath who told him about me. He liked my Kaitheri Sahadevan in Left Right Left and called me. Vijay Sethupathy was the hero. This was followed by Sashi Kumar’s Kitari. I’ve lost track of the count, so many followed. I was with Mahesh Babu in Spyder. I’ve never been bothered by language issues. In fact, I dub for myself in Tamil.

Opportunities are limited in Malayalam and the framework is small. But in Tamil, the canvas is wide. The offers I’ve been getting have helped me improve my performance.