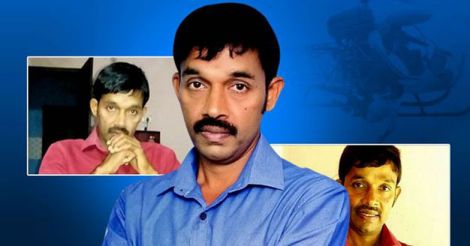 It was back in 2001 that Kollam native Murali Jayan came up with the claim that legendary actor Jayan was his father.

Actor Jayan is no longer with us. But over the decades since his tragic death in 1980, he has always been in the news. Among the issues that have made people remember Jayan after his death is one concerning his relatives.

It was back in 2001 that Kollam native Murali Jayan came up with the claim that Jayan was his father. However, following the intervention of the actor’s relatives, the news gradually faded away from public sphere. Now, after over a decade and a half, Murali Jayan has come back to the limelight.

Actor Uma Nair, in a recent TV programme, had claimed to be the daughter of Jayan’s younger brother. This statement was contested by actor Adityan and Dr. Lakshmi Nair, the children of Jayan’s brother Soman Nair. “Several people are claiming to be Jayan’s son and relatives for publicity,” said Adityan. It was in this backdrop that Murali Jayan came out in the open, replying to Adityan in a Facebook post. Both were engaged in a battle on social media, attracting much attention.

Speaking to Manorama Online, Murali Jayan opens up on life as the actor’s son and the humiliation meted out by Jayan’s relatives.

Don’t you feel the controversy over your claim to be Jayan’s son could have been avoided?

It is for me to prove that Jayan is my father. Relatives who were once close to me and my mother are the ones who are humiliating us now. However, a controversy can be avoided. Adityan and Lakshmi are my first cousins. As the son of Jayan’s brother Soman Nair, Aditan gained a name and fame in the film industry. We are happy about that. Till 2001, when everyone in Kerala learnt that I was Jayan’s son, everything was fine between us. With media taking up the matter, my father’s relatives started harassing us.

Could you explain how the issue cropped up again?

Uma Nair told a TV channel that she was the daughter of my father’s brother. In reply, Adityan said that some time ago, another person had reached a TV studio to announce that he was Jayan’s son. Adityan was referring to me and everyone knew it. Had I not responded, I would look like an imposter. I responded to his statement in order to avoid that. However, I received several threats after I made my stand clear.

Do you mean to say that Adityan threatened you?

Of course. I learnt that Adityan had told several persons that he would thrash me and also file a case against me for claiming to be Jayan’s son. Though I complained to the police regarding the threats, there was no response from them. Adityan used his influence to hush up the matter.

You know Adityan since both of you were kids. Under such circumstances, wouldn’t it be better that you settle the issue with a friendly talk?

I am not someone who enjoys creating controversies and have always taken care to keep away from media attention. The revelations of 2001 were made following some unavoidable developments. My father’s relatives, including Adityan’s parents, had long ago accepted me as Jayan’s son. However, for some strange reason, they refuse to say this in public. Adityan is an innocent chap. He used to call me elder brother since we were young. He had even promised to invite me for Lakshmi’s wedding. Adityan has attracted plenty of attention as the son of Jayan’s brother. So, he fears that if the late actor’s own son comes into the limelight, he would lose all the attention.

Tell us what your mother has revealed to you about her wedding to Jayan.

My mother Thankamma met my father’s mother Bharati Amma while my father was away serving in the Navy. Bharati Amma was in dire straits at that time and didn’t even have enough to eat. It was my mother who supported that family, providing money for food and other basic needs.  When my father learned about my mother’s help, he was thankful to her. He soon developed a liking for my mother and when he reached home, their wedding took place. There was no opposition even though my mother belonged to a lower caste and she quickly became part of my father’s family.

Could you describe some memories of your father?

Till I was aged two, I and my mother lived in my father’s house. When I was born, my father’s mother had even cared for my mother during the delivery. My father ventured into films after that. When he left our native place to build his new career, he told my mother that we will all soon live together happily. However, things took a different turn when my father earned fame and money. My father’s family began to treat me and my mother as outsiders and soon we were thrown out of the house.

What was your father’s response to this?

My father came to take me and my mother to his house on several occasions. However, as my mother was afraid of my father’s relatives, she refused to go with him. She also said that she didn’t want my father’s money. Still, my father used to look after me, meeting my expenses. He said that he wouldn’t remarry, a promise he kept till his death.

As Jayan’s son, did you have any painful experience?

Several, in fact. When I was young, many people used to greet me as Jayan’s son. Hearing this, several others said that I and my mother were imposters trying to grab my father’s money. Repeatedly hearing this, I became depressed and asked my mother whether I was really Jayan’s son. My mother then took me to a man named Kumaran who lived near the Beach. He was a close friend of my father. When we reached his house, he called me “Baby’s son.” Baby was my father’s nickname. Anybody can cross-check these facts.

Did you go to your father’s house after his death?

I went there twice. The first time was a few days after my father’s death. I went and stood in front of that house. Then, Adityan’s mother -  Soman Nair’s wife - came out and invited me inside. “This is your own house,” she said. However, I did not go in. My mother will scold me, I told her. I asked her to give me a photo of my father. She said some college students had taken all the photos and promised to give me one later.

The next time was when my grandmother died. That was after my mother asked me to go. On that occasion, Soman Nair swore at me and my mother. He physically pushed us out of the house. We had damaged that family’s reputation, he said. These have all been very painful experiences.

My father had told many people in the film industry about me and my mother. We were truly orphaned after his death.

Could you make your present stand clear?

I have never taken advantage of my status as Jayan’s son. I have acted in KPAC’s dramas based on my own talent. However, I have no acting ambitions and make a living as a driver and doing electrical works. As my mother long ago declined to accept my father’s money or share of property, I too don’t want all that. So, nobody needs to lose sleep over this.  But, the claim regarding paternity is my right and I will tell the world that Jayan is my father.

What are your future plans?

I will seek all legal measures to prove my stand. The procedures will be initiated during January itself. I have been told that by comparing the DNA samples taken from my blood with that of Adityan and his brother Kannan Nair, our relationship with Jayan could be proved. I am not concerned about Adityan’s threats. I have the support of my mother, wife, our two children as well as a small group of people who believe us.