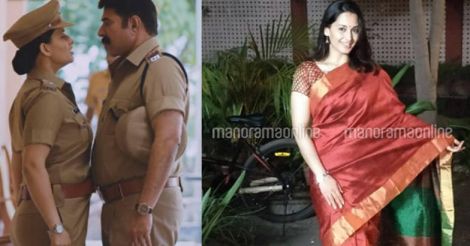 Jyoti Shah is a model from Uttarakhand.

The controversy triggered by the comments of actress Parvathy against the alleged misogynistic dialogues delivered by megastar Mammootty in the film Kasaba has stirred hornet's nest.

Meanwhile, Jyoti Shah, the actress who acted alongside mega star Mammootty in the controversial scene is aware about the ruckus her scene has created in the state and has come forward to make a statement.

Jyoti Shah, a model from Uttarakhand spoke to Onmanorama about the scene that has created much ado.

Do you know the controversy that a scene in your film has created?

I know that the scene has recently sparked row among Malayalam film film personalities. I don’t know Malayalam; neither do I watch Malayalam movies. But I have some Malayali friends. They conveyed about all the issues centered on that particular scene.

Do you think the scene was misogynistic?

The issue is not whether the scene was misogynistic or not. Things like this keep happening in society. Shouldn’t an actor play both positive and negative roles? Many women may have had experiences similar to the one in this scene in Kasaba. Is cinema a medium to portray only the good things in society? I think be it negative or positive, cinema should deal with all the aspects of our society. The character in Kasaba too is such a person. Just like every human being, Rajan Zacharia too has some flaws in his character. If one realize this and watch the movie, they wouldn’t find any fault either with this particular scene or the movie itself.

Did you find it uncomfortable to act in such a scene as an actress or as a woman?

Not at all. I wouldn’t have acted in that scene had I found anything wrong in it. In the scene, I and Mammookka are characters and it has got nothing to do with our personal lives. We are actors and it is our job to act according to the instructions of the director.

Your experience while filming the scene?

We spent only half a day for filming that scene. Initially director Nithin Renji Panicker enacted Mammookka’s part for me. I do not speak Malayalam. I realized how big a star is Mammookka only after reaching Kerala. I was not at all under pressure. Mammookka too was very cooperative on the sets.

How do you respond to the ongoing controversy?

Scenes like this are not solely restricted to this particular movie. Even superstars in Bollywood have done many such roles in their movies. Those who are stirring up a controversy choose to ignore that? Whoever wants to criticize can do that but they should also realize on what basis they are doing that. Cinema doesn’t project only the good aspects of society. It in fact reflects the realities of our society. One should be able to understand it with tolerance.