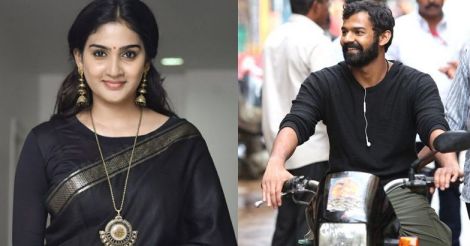 Aditi plays the role of Anjana, an employee of a cooperative bank, in the film.

Aditi Ravi is bombarded with questions these days. Everyone wants to learn about her latest co-star, Pranav Mohanlal. She is paired with the elusive star son in his debut vehicle, ‘Aadhi’.

Aditi said that she was only happy to answer the curious cats. The actress said that she was lucky to be part of the Jeethu Joseph movie. She would have settled for any minor role in the movie because she wanted to work with Mohanlal’s son, she added.

“I am sure that the team of Pranav’s second movie will not have to face so many questions about him,” she said. The movie is scheduled to hit the cinemas on January 26.

“Pranav is very simple. He talks to everyone. Everybody always treats him as Mohanlal’s son but he never carries that weight. He is comfortable to work with. I was tense as a newcomer but Pranav was very confident. He speaks fluent Malayalam but has difficulty in reading the language. He asks about the words he stumble upon,” Aditi said.

‘Aadhi’ has an array of characters, played by Lena, Anusree, Sharafuddeen, Siju WIlson and Siddique. “Lena plays the mother of Pranav’s character and I his friend. Every character is equally important. You can’t really say that I am the heroine of the movie. I play the role of Anjana, an employee of a cooperative bank,” Aditi said.

Aditi made her debut as a lead actress in ‘Alamara’, directed by Midhun Manuel Thomas but her first project was ‘Chembarathipoovu’ which was released only recently. The Thrissur girl completed her degree from Christ College at Irinjalakkuda before venturing into modeling.

She is already busy with her next movie, ‘Kuttanadan Marppappa’, with Kunchacko Boban. She also has an offer from Tamil.