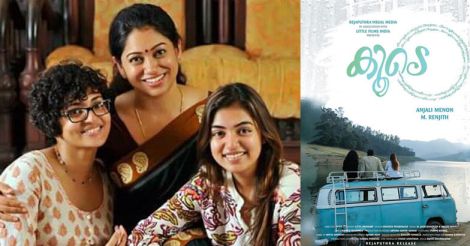 It was four years ago that film maker Anjali Menon stunned the entire film fraternity with her incredibly successful movie 'Bangalore Days' which boasted of an amazing ensemble cast. 'Bangalore Days' set the cash registers ring at the box office and had registered a record breaking collection from the theaters for commercial entertainer.

'Manjadikuru', the maiden directorial venture of Anjali Menon was a nostalgic return to her childhood memories. Then came the super hit 'Ustad Hotel', which was penned by Anjali who is an alumna of the famed London Film School. With the commercially and critically acclaimed 'Bangalore Days', the film maker went on to become the only female director who struck gold at the box office.

After a hiatus of four years, Anjali Menon is returning with ‘Koode’, which is reportedly a family entertainer. Actor Nazriya who quit movies post wedding is also making a comeback to the silver screen with ‘Koode’. Prithviraj plays the lead role while award winning actress Parvathy Thiruvoth too plays a significant role in the movie. Anjali Menon speaks about her latest movie ‘Koode’ and her experiences as a film-maker.

“My son had just turned two when I did 'Bangalore Days'. So after the movie got over, I had to spend some time with him. Meanwhile, I had begun to write the screenplay for the movie which was to be directed by actor Prathap Pothen. But I stopped midway when I lost the interest in collaborating with him. Producer M Renjith who was supposed to finance that movie, however, offered to do a movie with me. That is how I began writing 'Koode' one and a half years ago,” says the film maker.

Anjali confesses that though she knew the audience would like 'Bangalore Days' as an entertainer, she never imagined the movie to be such a huge hit. She says the movie possessed an incredible energy which she thinks was shared by the actors as well. Anjali says, “I believe that a movie does not belong to me anymore after it hit the theaters. The audience may or may not perceive the movie as I had. So the amazing success of the previous movie did not put me into pressure while writing this one.”

A ten-day camp was conducted in Ootty for the cast and crew prior to the filming of the movie. Theater artist Vinu Francis headed the camp which was fun filled and productive. The camp helped the crew members to communicate and cooperate with each other in a better way, and this chemistry proved vital to have smooth and comfortable filming schedules.

The other side of Prithviraj

Anjali Menon says actor Prithviraj posses an extremely soft and sensitive side to his personality rather than his onscreen persona. She vouches that the character named Joshua truly reflects the actor’s sensitive personality. “Prithvi has an incredible memory power. Just one reading of the screenplay is enough for him to remember his scenes and dialogues, and he would even memorize the lines of other characters as well. I have tried to utilize that quality in ‘Koode’. Prithvi was given the screenplay prepared in English. During the filming his dialogues were not prompted, instead he was given the liberty to improvise. He amazingly utilized the opportunity to improvise on his dialogue presentation. ‘Koode’ is in fact Joshua’s story,” says Anjali Menon. 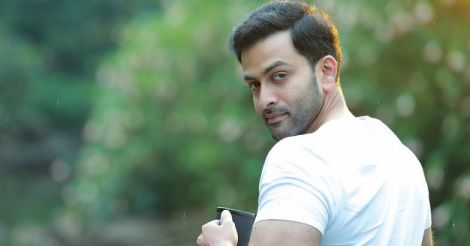 Anjali adds, “Joshua’s childhood, thoughts and his love for travelling forms the crux of the story. You could call it a road movie to a certain extent. If 'Bangalore Days' was a celebration of the youth, ‘Koode’ is a family entertainer. It also has a place for the vibrant youth and nostalgia. Parvathy plays the heroine while Nazriya essays the role of Joshua’s sister.”

Film-maker Ranjith and Parvathy play the roles of Joshua’s parents. Besides a few theater artists and new comers, actors like Atul Kulkarni, Roshan Mathew, Sidharth Menon, Nilambur Ayesha, Pauly Valsan and Darshana Rajendran too play pivotal roles in the movie. ‘Koode’ was shot at various locations around the picturesque Nilgiris. Lighting up the sets was a challenge in the misty climate of the Nilgiris. Anjali says that cinematographer Littil Swayamp has done an incredible job canning the immense beauty and charm of the mesmerizing location with perfection.

“When everyone else got themselves busy with other projects after 'Bangalore Days', Nazriya and I took a break from movies. We would call each other occasionally to share ideas of common interest. Meanwhile Nazriya told me that she was interested to make a comeback. I replied that I have a movie in my mind, and promised to let her know when it was ready. When I finished writing this movie, I met Nazriya in person to narrate the character to her,” Anjali reveals how Nazriya found her way into ‘Koode’.

Anjali says that though Nazriya was worried at the camp whether she would be able to act again, the actress was quick to get back into her usual ‘form’ when she was in front of the camera. Nazriya’s role of a charming and energetic youngster in ‘Koode’ perfectly suits the actor’s real life persona.

“Parvathy is very professional. I didn’t tell her that she had a role in ‘Koode’. Parvathy had earlier asked me to her let work as an assistant director in my next movie. It was only later that I spoke about the role. We shot the movie when Parvathy was facing a scathing attack on the social media. But it didn’t affect her as an artist. She may have been bothered by all those controversies in her mind, but I think she possesses the ability to find inspiration from everything. The atmosphere on the sets was very relaxed and devoid of any external interference,” says the film-maker.

Writing is equally strenuous and enjoyable

Anjali Menon confesses that the process of writing is equally strenuous and enjoyable. The film-maker, who rewrites her screenplays many times, had rewritten the script of 'Bangalore Days' nine times. “Every time I rewrote, the second half would change. It was in the fifth draft that the Sera played by Parvathy became a character who was wheelchair bound. Two weeks before the filming started I totally changed the second half. It was then the characters of Kuttan played by Nivin and Sera got its final shaping. The screenplay of ‘Koode’ too has eight drafts. After completing the script, I would give it to a few friends outside movies, who are also good writers and readers themselves, to read. I would even consider their opinions and advices. I usually prepare the drafts of my script in Malayalam, English and also in Manglish to suit the comfort level of all the artists and crew,” says the director.