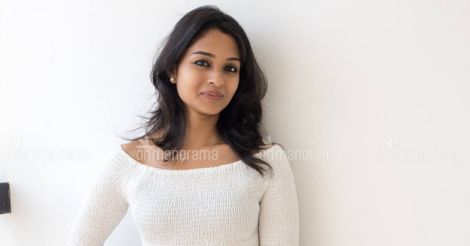 Vinitha's family never agreed when she sought permission to act after seeing a casting call.

“When I sought the permission of my family to act in movies after seeing a casting call, I got a stern ‘no’ for an answer. Cinema was not in my mind after that. After completing my studies and post wedding, I moved to Singapore to work as a pediatric counsellor. It was then I received a call from Vineeth Sreenivasan. He told me to reach Kerala the next day if I was interested to portray the role in Aanandam. This time, the ‘brand name’ of Vineeth Sreenivasan worked,” says Vinitha with a smile. Vineeth Sreenivasan had invited Vinitha to essay the role of Lovely miss in the movie after watching some of her dubsmash videos. The actress settled in Aluva after the incredible success of her debut movie.

‘Ottamurivelicham’ portrays the harrowing tale of a helpless woman whose dreams get shattered mercilessly after marriage. The critically acclaimed movie dealt with the issues of domestic abuse and women’s suffering. Vinitha says, “The role was pretty challenging. But Rahul Riji Nair and his team were extremely helpful. I had become a part of the group after collaborating with the director for an album. So, I was able to perform without any stress. We shot at a small one-bedroom house in Bonacaud estate. It was very difficult to adjust with city life after shooting at this peaceful place for almost 20 days.”

“The role of Vineeth Sreenivasan’s mother Clara in ‘Aby’ too was challenging. But I did not take up many roles that came my way after that as all of them were typecast. It was after the album song ‘Mounam Sollum Vaarthaikal’ that people began to like me as an actress. The song has already crossed 8.7 million views on Youtube. Rahul Riji Nair, who directed ‘Ottamurivelicham’ is the director of this album as well,” says actress.

Vinitha says the state award has always been a dream and she never imagined winning it so soon. She says, “I must probably be the last one to know about the award. I was not receiving any phone calls or messages due to poor mobile reception. Even when I came to know about it, I thought someone was trying to fool me. To compete with actresses like Parvathy and Nimisha, and then winning the special jury award is like winning the Oscar. I had, in fact, though of quitting movies to return to my old job. But this award has given me the energy to await amazing roles. We are grandly celebrating the award at home. My husband, Jose, and cousins are really excited and are having a great time.”

The actress, who has already visited 17 countries, is passionate about travelling. “My latest trip was to Europe in January this year. I love reading as well. Though I danced and sang as a kid, I never got the chance to train in it. The dubsmash videos became a hit when I was planning to start a YouTube channel. So I gave a shot at it. It was my friends who encouraged me to start a channel on YouTube. I also did some other acting videos besides dubsmashes. My parents stay in Kollam and my brother is settled in the Netherlands,” Vinitha says.

“After my first movie, my dream was to essay a serious role. It became possible through ‘Aby.' After that, I wished to do a lead character, which I did in ‘Ottamurivelicham.' Now, don’t ask me what my next dream is. I am already very excited. When ‘Ottamurivelicham’ garnered positive reviews at many international film festivals, I expected the movie to win awards. I am really thrilled that ‘Ottamurivelicham’ got four awards,” she adds.