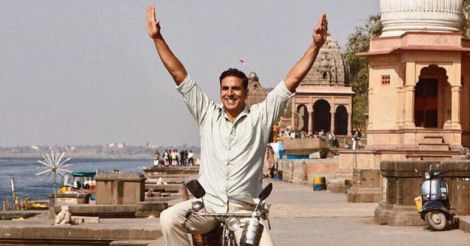 Can a movie break a taboo that is probably as old as the human civilization? Unlikely, but it can certainly poke, jolt and finally force the manly Indian society, which automatically goes into a sleep mode on the sheer mention of women's problems, to see and hear the words – periods, pad, chums, pad - over and over again in a span of two hours and 20 minutes.

Akshay Kumar plays Lakshmikant Chauhan, a simpleton from the Hindi-speaking badlands of India, much adored and loved by his all-woman family complete with wife, mother and three sisters. Lakshmi's love does not end by merely gifting a flower to his beloved, but he swears by the vows he had taken while walking the saat-phere. Even if it means setting up a simple vegetable cutter to dilute the everyday task of chopping onions or fixing a seat behind his bicycle for her, Lakshmi smilingly goes all the way. But a dirty rag of a cloth his wife hides behind the saree outside their house haunts him to no end, becoming a burning obsession that chases away the same set of people whom he tries to protect.

Alarmed by the health threats staring down at women who resort to using dirty rags and even newspaper during their periods, Lakshmi begins to experiment and uses all means to find a way to manufacture low-cost sanitary napkin. He comes up with a set of amateur pads, but is unable to find a user to test his product and runs behind college students and teenage girls, all of whom shun him like a dreaded disease.

The more experimental he gets, the further he moves away from his folks and their concept of sanity. Baffled and petrified by the interest taken by the man of the house in a woman's problems, Gayathri is left sobbing into her ghoonghat. Branded as 'mad' and ostracized by his family, Lakshmi sets on his mission of turning the shame suffered by his wife into respect. After hitting countless obstacles, he comes across Pari, who literally saves the day for him. Pari, played by a bubbly Sonam Kapoor, opens the door of opportunities for him.

'Aami' review: her story through his eyes

The movie by ad-filmmaker-turned-director R Balki more or less stands loyal to the real-life story of Arunachalam Muruganantham, a social activist from Tamil Nadu. But for the romantic strings that they try to attach between two of the protagonists, the makers can claim of making a movie that is clean of the Bollywood cliches. Credit also goes to co-producer Twinkle Khanna for first writing about Arunachalam in her collection of short-stories The Legend of Lakshmi Prasad and then giving the tale a space on the silver screen. And for a good measure, she put her husband in charge of things. 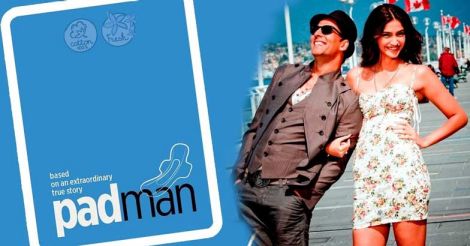 Akshay Kumar breathes life to Lakshmi, giving an endearing performance, and single-handedly carries the film, helped along by some punchy dialogs in Linglish (Lakshmi's English). He is supported ably by Radhika Apte, who portrays the travails of a woman who is torn between the love for her husband and the taboo of shame.

Chandan Arora too has done a good job, editing the piece and keeping the plot on track, without any deviations. The musical department offers a mix of likable songs that ring along without watering down the plot. The movie is not without flaws and the plot sometimes makes it too easy for Lakshmi. But for those minor glitches, the movie should be lauded for telling a tale that needs to be told. This one certainly doesn't bleed!