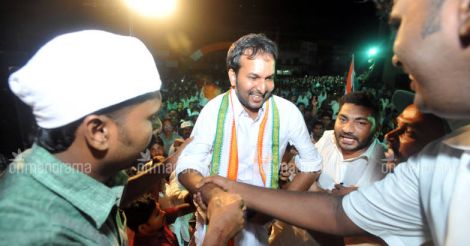 P C Vishnunath speaks to Onmanorama in the second and concluding part of a special interview as campaigning reaches fever pitch in the high-stakes Karnataka assembly elections.

Also read: If BJP wins the danger is not to Congress but to India, says PC Vishnunath

Q. A generational shift has been signalled in the party as Rahul Gandhi became the Congress president. You are part of a brigade that the new Congress is raising. Will there be a Rahul wave in 2019 like the Modi wave of 2014?

A. Rahul Gandhi is building a team of young leaders. The appointment of K C Venugopal as a general secretary in-charge of poll-bound Karnataka is the biggest example of this. Along with Venugopal, four other secretaries, including myself, are working in Karnataka now. Rahul Gandhi has chosen youngsters who have worked in NSU and Youth Congress to shoulder the responsibility. After 2014, the BJP lost 18 of the 23 bypolls held across the country. The Congress has not won everywhere. However, people have rooted for the Congress where they knew the party was going to win. You saw this in Rajasthan, Punjab or Madhya Pradesh. If it was Trinamool Congress or Aam Aadmi Party that was better placed, people voted for it. People are willing to vote for anybody who can defeat the BJP. If you keep aside four or five states, the BJP failed to repeat its 2014 performance elsewhere. Other than Uttar Pradesh, Maharashtra, Haryana, Uttarakhand and Tripura, which is the single largest party in other states? Who has won the most number of seats in Delhi, Bihar, Punjab, Manipur, Goa and Meghalaya? Why couldn't the BJP perform in Gujarat as well as it did in the Tripura?

There is no doubt that Rahul will be able to generate a huge wave. But it may not be around an individual. Instead it will bring together all secular forces and parties that believe in secular politics. It will be led by Rahul Gandhi. The Congress is never autocratic. So, we will never call it a Rahul wave. In realistic terms, there will be a surge of secular forces. It could be led by Mamata Banerjee in West Bengal, the BSP in Uttar Pradesh or a DMK-Congress alliance in Tamil Nadu. In Andhra, it could be along with Chandrababu Naidu. The Congress may go it alone in Madhya Pradesh, Rajasthan, Punjab and Kerala. In any case, secular parties will see a quantum leap in 2019 for sure.

Q. Your name was one of the first to do rounds for the Chengannur bypoll, but you backed out without giving rise to any speculation. Were you hinting that you won't return to Kerala politics?

A. No. I am a member of an organisation. The party had asked me to contest in Chengannur when I was the KSU president. Chengannur is neither my native place nor my district. But today I am a native of Chengannur and it had reposed its faith in me twice . Though I failed in the third attempt, I am still in Chengannur; I still live there. I just did what the party asked me to do and fought elections thrice. Thereafter, I became part of the national leadership of the Youth Congress. Now, the party has given the responsibility of Karnataka elections. What the party has asked me is not to contest in Chengannur now, but to work towards a Congress victory in Karnataka. In this scenario, I can't contest in Chengannur. If given a chance later I would like to contest and win again and become an MLA from Chengannur. Though, I would love to do that even now that task has not been assigned to me. If I had to choose between desire and responsibility, I will always choose responsibility. That is why I backed out of Chengannur without giving scope for any speculation or confusion. I will contest from wherever the party asks and won't do anything against the party.

Q. How do you assess your performance as an MLA and now as an organiser? Which role do you like the most?

A. I love both the roles. An MLA's responsibility is different. One needs to work with people on issues that concern the public. As an organiser, things are different and the scope of work is huge. As an MLA I was confined to a constituency. Rahul Gandhi has given me the responsibility of 49 constituencies in Karnataka. I have to take care of all organisational activities, trouble-shoot, and take forward all party-related works. It was the KSU that groomed the leader in me. I have enjoyed my work all along.

Q. Youngsters are given preference these days. Will the number of young MLAs in Kerala go up next time?

A. The representation of youth will certainly rise. Those who have worked along with me in the KSU and in the Congress are now in the assembly. In 2006, when I fought assembly elections for the first time, myself and another person were the only youth leaders. In 2011, several others won along with me. They included V T Balram, Shafi Parambil, Hibi Eden, Anwar Sadath and P K Jayalakshmi. Last time, Roji John and Eldos Kunnapally won. Naturally, more youngsters will be in the assembly next time.

Q. What next after Karnataka?

A. I will work wherever the party asks me to work. I will accept whatever the party says. I can't decide on my own. It doesn't matter whether it is within Kerala or outside.