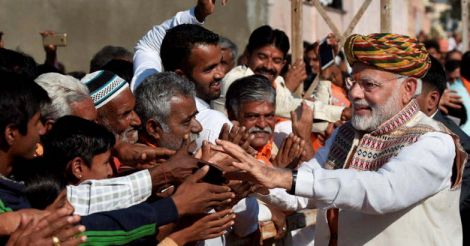 Prime minister Narendra Modi meeting public during his election campaign for the forthcoming Assembly polls in Bhuj on Monday. PTI

Jasdan/Bhuj: Pushing the BJP's campaign in Gujarat into high gear, prime minister Narendra Modi on Monday said he is ready to sell tea but will never sell the country as he asked Rahul Gandhi why he had applauded the release of LeT chief Hafiz Saeed.

Modi, who started his high voltage campaign with rallies in Bhuj in Kutch district, Jasdan in Rajkot, Chalala in Amreli and Kadodara near Surat, took on the opposition Congress on issues related to China, Lashkar-e-Taiba's Hafiz Saeed, the surgical strike as well as corruption.

He accused the Congress vice president of applauding the release of a terrorist in Pakistan and asked why he hugged the Chinese ambassador during the Dokalam standoff.

"You are happy to hug the Chinese ambassador, you are clapping at the release of Hafiz Saeed, you cannot respect Indian Army's surgical strike... But why did you speak about it? You could have just remained silent," he said in Bhuj, not specifying how and where Gandhi had hailed Saeed's release.

The tweet had come after the release of LeT founder and 26/11 mastermind Saeed by a Pakistan court.

Hitting out at the Congress over a recent meme targeting his "chaiwala" past, the prime minister said in Jasdan that he is being targeted by the main opposition party because of his humble background and for being born to a "poor mother".

"They are feeling uneasy because a chaiwala became the PM. We used to read in books how the downtrodden get harassed by those in higher strata. But I never imagined they would stoop so low," Modi said in his speech in Gujarati at Jasdan ahead of the first round of polling on December 9.

He said he gets messages from people threatening him that they would once again turn him into a tea-seller.

"I want to tell them that I am Modi, who is ready to sell tea but will never commit the sin of selling the entire country," he said, in an apparent reference to scams during the Congress-led UPA rule.

"Why are you mocking poverty? Why are you insulting a poor mother?" he asked.

In an apparent bid to woo the influential Patidars, who seem to be drifting towards the opposition party, Modi said the Congress "harassed" four former chief ministers of the community because of a "grudge" against Gujarat.

Without directly accusing the Congress of fanning the protests, Modi said the opposition had done everything to "disturb" the BJP's Anandiben Patel-led government.

"They fanned violence to disturb her. This Congress party harassed four Patidar CMs just because the people of Gujarat never accepted the party."

At the Bhuj rally, Modi pitched the election as a fight between trust on development and dynastic politics.

He asked the people of Gujarat not to forgive Congress leaders as they had leveled baseless allegations on the "son of Gujarat" who has a stainless public life.

During his campaign in the state in the last few days, Gandhi had trained his guns at the Modi-led government over the Rafale fighter aircraft deal.

He also alleged during his campaign that Modi is not a "chowkidar" (watchman) but a bhagidar (partner) in "corrupt" practices in BJP president Amit Shah's son Jay Shah's company.

"I have grown up on this soil, you Gujaratis know my plus and minus points, what was good in me has evolved due to this `mitti' (soil) due to my mother (Gujarat)," he said, seeking to emotionally connect with voters.

The prime minister said Gujaratis will not forgive those attacking its child.

Recalling Sardar Patel, he said the Congress should understand that Gujarat tolerated insults when atrocities were committed against him but the times had changed and they would not do so again.

Modi said many people have come here for election campaigning and "sprayed muck".

"Farmers prepare their land before the start of the monsoon season. In the same way, much muck has been sprayed here. It is good as it will help the lotus (BJP's election symbol) bloom."

Modi referred to the 26/11 terror strike and the attack in Uri and asked what the difference was between one government and another, one leader and another.

"They killed our soldiers in Uri, our soldiers went inside their territory, conducted a surgical strike and came back. The next day a newspaper said they (in Pakistan) carried bodies in trucks," he said.

Modi alleged that the Congress raised questions on the surgical strike in September 2016.

"They could not respect Indian Army, they asked questions like none of our soldiers was injured? None of them died? Have you any photo or video evidence? Had they gone to shoot a movie in Pakistan?" he said.

The second phase of elections to the 182-member Gujarat Assembly will be held on December 14. The votes will be counted on December 18.