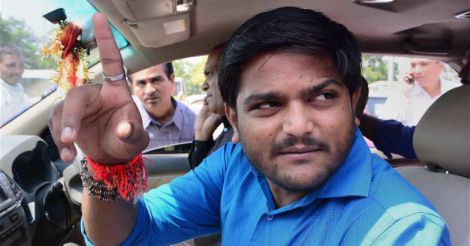 Ahmedabad: A light mustache and beard. A tilak on his forehead. Five-and-a-half feet tall. This youth who still looks like a college student has become the nerve center of Gujarat politics.

His words, in a mix of Hindi and Gujarati, have given sleepless nights to the BJP, while the Congress looks up to him to deliver a better show.

To contest an election, one has to be 25 years old. But Hardik Patel is only 24. But he is now the eyes and ears of the rich and influential Patidar community of Gujarat. A B.Com graduate from Ahmedabad's Sahjanand College, cricket lover Hardik came to the forefront through the association of Patel youths, the Sardar Patel Group.

He declared support to the Congress on Wednesday, thus bringing the thrill of a Twenty20 match to the Gujarat Assembly polls.

Hardik has given hopes to the Congress after a fight over seat sharing threatened the alliance possibility. Hardik says the Congress has promised that the if elected, the party would provide reservation to the Patidars and introduce a bill in the Assembly in this regard.

Hardik spoke to Manorama at a hotel in Ahmedabad's Patel Avenues. Saurashtra is the stronghold of Patels who account for 16 per cent of the population in Gujarat. In the 182 seats, all constituencies, including the northern area, have considerable presence of Patels. The Patel community is made up of the Leuvas who mostly cultivate cotton, tobacco jeera etc and Kadvas who are employed in government and private sector companies. Both groups are known for their entrepreneurial skills in business and agriculture. Three of the former chief ministers of Gujarat were from this community. They include Chimanbhai Patel, BJ Patel and Keshubhai Patel. Today, the community is led by the PAAS, whose convener is Hardik Patel. Edited Excerpts:

Since the quota can't go above 50 per cent, do you think the Congress will keep its word?

Definitely. We have agreed to the formula put forward by the Congress to offer reservation benefits to Patels and other communities. They have promised us reservation on the basis of Articles 31 and 46 of the Constitution. They will include this in their manifesto too. The Indian Constitution doesn't say quota should not exceed 50 per cent.

There were dissents within the Patidar Anamat Andolan Samiti (PAAS) after the failure of seat sharing with the Congress.

That is what BJP is trying to spread. They want a split within PAAS. That will never happen.

How do you evaluate the two-decades-long rule of BJP in Gujarat?

The BJP has destroyed Gujarat. Farmers are helpless. About eight lakh youths are without jobs. The government is in a big debt trap. The life in villages is pathetic.

The hot topic this time is caste politics. In a democracy, is politics on the lines of castes advisable?

There are several castes and sub-castes in the country. You have to acknowledge that fact.

You have all the qualifications to take the plunge into active politics. Any plans for that?

I want to stand for the community. Its development is my aim. I haven't thought about anything other than that.

The community is in a backward state now. Youths who have done post graduation are without jobs. Thousands of industrial units, including diamond businesses, have been shut. In 20 years of the BJP rule, there is no other community that has suffered the most. The GST has come as a body blow to merchants and traders. It was an unplanned exercise.

You have emerged as a strong challenge to prime minister Narendra Modi and BJP national president Amit Shah in their strongholds...

It has been like this for the past more than one year. It might continue like that for the next 50 years. I will continue fighting against them.

How many seats will the Congress win in Gujarat?

Between 98 and 102. (92 seats are needs for a majority. Hardik hints that if the Patel community is with the Congress, it is possible).

Rahul is a strong leader. People throng to listen to him. I believe that he has the capability to lead the country.

I am not a Congressman. But I will be in the forefront of the fight against the BJP. We didn't ask the Congress for any seat. But there are Patel candidates in their list. They can win on their own. The community knows what to do.