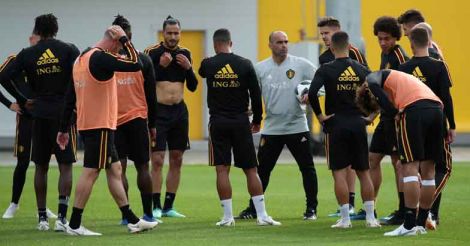 Depending on the outcome of other games, it may not be an advantage to finish top of the group, but both sides insist they won't take such calculations into account.

What is likely, however, is that Belgium coach Roberto Martinez and his English counterpart Gareth Southgate will rest some of their regular starters and give match time to back-up squad players.

Both teams have beaten Tunisia and Panama to reach six points and secure passage to the last 16, so the anticipated battle between the two strongest sides in the group has lost its edge.

"I think it will be an interesting game, a 50-50 game, and both teams are qualified so it will be a strange game," said Fellaini, who plays in England for Manchester United, having made his name for another Premier League club Everton.

Martinez has suggested he could make wholesale changes to his side but at the very least is expected to rest defender Jan Vertonghen, winger Thomas Meunier and midfielder Kevin De Bruyne, who have all picked up a yellow card. A second yellow would mean they would be suspended for the round of 16 game.

Southgate acknowledges there is a balance to be struck between keeping his side fresh and injury-free and maintaining the momentum they have gained, particularly from the 6-1 crushing of Panama.

"I’ve got to think through all of those things: competition for places, players who need match minutes, and keeping the unity of the squad," said the England manager.

Harry Kane's involvement is one of the tricky decisions facing Southgate.

The England captain has scored five goals in two games, including his hat-trick against Panama, and while his manager will be reluctant to leave him on the bench, his centrality to England's hopes is such that he may be wary of him picking up an injury.

Topping Group G means playing whoever will have finished second in Group H earlier on Thursday - Colombia, Senegal or Japan.

But the path to the quarter-final could see a match against Germany or Brazil for the winner - a question which will be determined before England and Belgium clash in Kaliningrad.

This will be the fourth meeting of the two nations in major tournaments. They have drawn twice in group stage games, and their last-16 match in the 1990 World Cup saw England win 1-0 after extra-time.