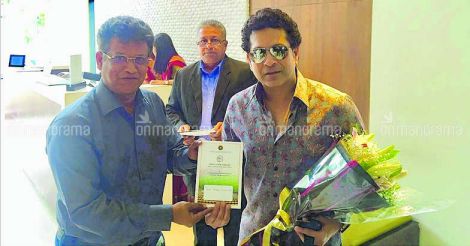 KCA secretary Jayesh George hands over the invitation to Sachin Tendulkar during his visit to Thiruvananthapuram Thursday.

Thiruvananthapuram: The state capital is getting ready to host an international cricket match after a gap of nearly three decades and the Kerala Cricket Association (KCA) is leaving no stone unturned in its efforts to make it a grand event. The KCA has invited cricket legend Sachin Tendulkar to witness the T20 International (T20I) to be played between India and New Zealand at the Greenfield International Stadium here on Tuesday.

KCA secretary Jayesh George handed over the invitation to Sachin during his visit to Thiruvananthapuram Thursday. Sachin had met chief minister Pinarayi Vijayan Thursday to seek the government's support for the forthcoming Indian Super League (ISL) season 4. Sachin is the co-owner of ISL franchise, Kerala Blasters.

Sachin, who was also the brand ambassador of the National Games which the state organized in 2015, has said he would try his level best to make it to the T20I though he has a prior appointment in Jodhpur on the same day.

The India-New Zealand match will also be the first-ever T20I to be played in the state.