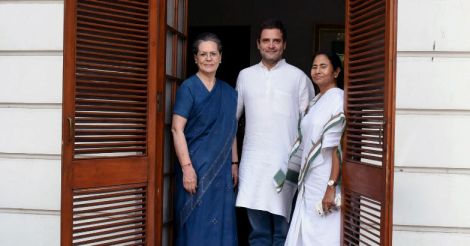 Banerjee said no names were discussed at the 40-minute meeting, which was also attended by Congress vice-president Rahul Gandhi.

It was, however, not known if the two leaders discussed the possibility of persuading the incumbent, Pranab Mukherjee, to seek a second term.

Sources said Banerjee met with Mukherjee late Tuesday. However, no official confirmation was immediately available on the meet.

Bihar chief minister Nitish Kumar Monday urged the BJP to build consensus on the presidential candidate. He suggested that Mukherjee be given another term.

After the meeting, Banerjee reiterated the need for consensus on the issue.

"We want the entire Opposition to get together and come up with a candidate who will be good for the country," she told reporters after the meeting at 10 Janpath, the residence of the Congress chief.

"It was an important meeting. There are so many political equations. We will talk together, we will discuss together," Banerjee said.

She said if the Opposition wanted, it could set aside differences for this purpose.

"There is still time and we will meet again. But the government should also take the initiative for a consensus candidate," she said amid speculation that some Opposition leaders favored another term for Mukherjee.

The Congress, meanwhile, said its leadership was holding talks with various parties in a bid to agree on a common candidate for the president's post.

The meeting between Banerjee and Gandhi was part of a series of meetings that the Congress president has been holding with other political leaders on the issue.

Asked if the Congress supported a second term for Mukherjee, AICC in charge of communications Randeep Surjewala said, "The Congress president and vice-president will confer with various people and we will try and build a consensus."

He did not comment on another term for Mukherjee, but said the party was "extremely proud that the president comes from the pedigree of a thought process and ideology that has been a centrestage of this country from its formation till today and will continue in future."

He said the posts of president and vice-president were "intrinsic to our democratic set-up". The president was not just the commander of the armed forces, but also the protector of the Constitution, he said.

"It is also the role of the president and the vice-president to counsel the government when it loses its way. So bereft of political partisanship, you need on these two posts people who will be able to uphold the highest principles enshrined in the Constitution," Surjewala said.

Meanwhile, Banerjee, who also criticized the government for unleashing what she called a vendetta against its political rivals, accepted RJD supremo Lalu Prasad's invitation to attend an all-India rally of political parties opposed to the BJP-led central government on August 27.

"Lalu Ji, We accepted your invitation to be there on August 27. We will be there," Banerjee tweeted.

Banerjee's acceptance of the invitation came on a day when I-T raids were carried out at various locations in Delhi and other areas over alleged benami properties linked to Yadav.

Reacting to the meeting between Gandhi and Banerjee, a CPM leader said, "She has pitched for a consensus candidate by the Opposition parties, which has been our position from the beginning. The TMC has joined the CPM on the issue."

Sources in CPI said they did not object to Banerjee joining the Opposition rank on the issue.

"The united Opposition will need votes. We do not object to the TMC being on the same page as other Opposition parties on the polls," a top CPI leader said.