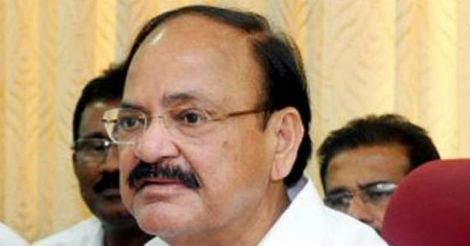 BJP president Amit Shah, senior leader Murli Manohar Joshi as well as leaders from BJP allies and those from other regional parties, including the AIADMK and the Telangana Rashtra Samiti, accompanied Naidu as he filed his papers in the parliament complex.

The Shiv Sena was also present.

Modi, finance minister Arun Jaitley, external affairs minister Sushma Swaraj and several top leaders of the NDA were among those who proposed and seconded Naidu's candidature in the several sets of nomination papers filed in his favor.

The BJP's Parliamentary Board had Monday picked Naidu as the NDA's vice-presidential nominee.

The senior BJP leader resigned as urban development and information and broadcasting minister hours before he filed his nomination papers.

The vice-presidential is scheduled to be held on August 5.

Naidu will contest against the opposition's vice-presidential nominee Gopalkrishna Gandhi.