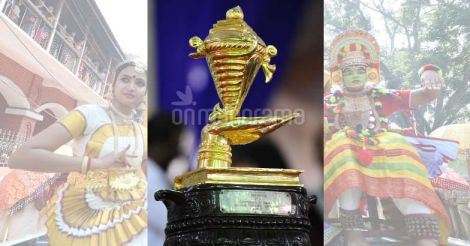 Kannur: As the curtain comes down on the 57th State School Kalolsavam, here's a look back at the hosting of Asia's biggest youth festival.

The Kalolsavam venues lacked basic facilities on day one as the green rooms in various places had no doors, forcing the participants to manage with whatever facilities they had. There was not even a proper toilet facility in the main venue on the first day and complaints started pouring in from students and parents. A temporary toilet facility was set up on the second day onwards.

The dawn-to-dusk hartal announced by the BJP after its worker Santhosh was hacked to death did create confusion among the participants. Though the state school festival was exempted from the hartal, many BJP workers blocked the vehicles carrying participants on the highway. They also decided to take the body of the slain worker on the road in front of the main venue creating an unnecessary scene during the Kalolsavam.

Most venues of the youth festival were packed with people cheering the participants and encouraging them for a tight competition. The main venue was so crowded in the last three days that it was difficult to walk through the police ground. Most of them were seen standing on the sides of the stage just to have a view of the event. The crowd cheered the participants with many appreciating the best teams for their performance. Kannur citizens, in general, were very helpful giving proper directions to those who came to attend the event. The auto-rickshaw drivers even stunned the Onmanorama team with their best behavior. Sticking to the meter reading, most of them charged us properly without demanding extra money, which is rare in other districts of the state.

This Kalolsavam was noted for its eco-friendly measures with organizers distributing cloth bags to the students and parents. Kannur collector's 'plastic-free city' campaign also worked out pretty well and even the waste bins were made of coconut fronds. The use of plantain leaves for serving lunch, 5,000 steel glasses arranged for the crowd to drink water, and the 'Green Army' ensured Kalolsavam a grand success.

This year, the school festival was held with Vigilance and Anti-Corruption Bureau (VACB) keeping a close watch on the functioning of the Kalolsavam. Organizers even revamped the list of judges for the various events. The confidential list of about 700 judges was largely composed of fresh faces this time. They were shortlisted from among nominations received from government institutions and academies. Judges who had been accused of unfair verdicts have been kept out. Many of the nominated people were removed from the list even at the last stage based on the complaints received.

(With inputs from Nelson K Paul)