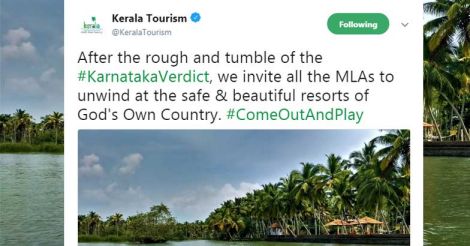 Call it ingenuity or proactive entrepreneurship - the best of Tweets on Karnataka election result day was the one from Kerala Tourism's official handle. It welcomes all 'MLAs from Karnataka to unwind in the safe resorts of Gods Own Country after the rough and tumble of the elections.

The tweet stood out among the hundreds of ones - ranging from profound to inane. Also, journalists and political observers were quick to point to the underlying political message. Some contended that the coinage 'safe resorts' was deliberate to send across a mildly responsive or even vindictive message to the BJP's national pitch that Left-ruled Kerala was an unsafe place to live.

After the rough and tumble of the #KarnatakaVerdict, we invite all the MLAs to unwind at the safe & beautiful resorts of God's Own Country. #ComeOutAndPlay pic.twitter.com/BthNZQSLCC

The resort politics is one of the distinct features of India as political parties cutting across ideologies have in the past herded their lawmakers to various posh residencies in the country to stop them from defecting during some crisis situations.

In a recent incident, the Congress party last year shifted 42 MLAs from Gujarat to a resort in Bengaluru to prevent them from shifting loyalties to the BJP ahead of the Rajya Sabha poll.

In June 2016, Rajathan BJP MLAs were stashed away in a resort in Jaipur ahead of the Rajya Sabha elections.

Interestingly, Karnataka and especially Bengaluru has been the stage for the brazen act of realpolitik several times in the past. In 1983, Ramakrishna Hegde had to conceal his MLAs to protect them from the Congress when Indira Gandhi decided to topple the Janata Party government led by him.

Later, Telugu Desam party chief N T Rama Rao transported his legislators away to Bengaluru before being shepherded off to New Delhi after he had to face an intra-party revolt.

NT Rama Rao again faced a similar crisis in 1995 and this time he shifted all MLAs supporting him to the Viceroy Hotel in Hyderabad.

In February 2017, when the AIADMK was threatened by a split after J Jayalalithaa's death, the Sasikala camp packed all MLAs supporting it off to the Golden Bay resort near Kalpakkam to prevent them from going over to the O Panneerselvam’s faction.

In 2006, Kumaraswamy brought down the Congress-JDS coalition government in 2006 by taking his MLAs to a resort in Bengaluru. Interestingly, Kumaraswamy is likely to be the chief minister this time with the support of the Congress if the governor gives nod to the combine to form government.

In June 2016, the Congress party in Karnataka whisked away 9 independent MLAs to Mumbai, who were expected to back a Congress nominee in the Rajya Sabha polls.

All four Reddy brothers and family are set to win their seats. Janardhan Reddy is the guy who spent 500 crores on his daughter's marriage 10 days after Demonetisation. #KarnatakaElections2018 pic.twitter.com/etd7IE0bRa

Mr @siddaramaiah looking at the two seats he stood on. #KarnatakaElections2018 pic.twitter.com/afm2jdU68d

The troll and memes ranged from those poking fun at the 'redoubtable' chief minister Siddharamaiah to a 'valiant' Amit Shah who says he managed to send over a 100 leaders to Karnataka.

Trollers took irresistible snipes at Congress president Rahul Gandhi and his compatriots too.