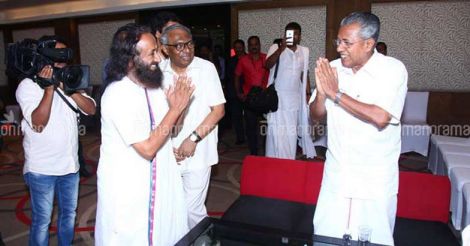 The CM said happiness was a state of being and Kerala would rank among the top places where people were reluctant to see the unhappiness of others.

Delving into the historical and social context of happiness, Pinarayi said happiness was earlier the privilege of the affluent. Now, it has become a basic right.

"This is the result of multiple modes of awareness creation. The government is duty-bound to provide maximum happiness to all and the mission-mode activities are aimed at this," he said.

Urging media houses to weigh how much positive news was being dished out, he said the conclave should be an opportunity for Kerala to introspect how happy we were.

Also read: We need tag of a graft-free state, not low-corruption one: Pinarayi

Something as simple as a clap can alter our well-being, Art of Living founder Sri Sri Ravishankar has said.

Interacting at the conclave, he said the act of bringing your hands together delivers you in the present. This is spontaneous and that was why babies clapped a lot in happiness, he said. Read detailed story

Also read: Just how happy are we? Manorama News Conclave, 2017 to find out

Kerala should move away from the typical dichotomy of socialism and capitalism to the more practicable sustainable development to move ahead, NITI Aayog chief executive officer Amitabh Kant has said.

Speaking at the Manorama News Conclave here Saturday, he said Kerala was at the crossroads as the very pillars on which the state had built its economy were facing challenges. Read detailed story

People prefer to watch the same kind of media they crib about, says @BDUTT at #Manoramanewsconclave 2017 pic.twitter.com/rZedae9DOy

Journalist-anchor Barkha Dutt said it was not appropriate to flay journalists. TRPs would change if anything innovative is accepted. People had been cribbing about the things they watch keenly, she said. Read detailed story

Dare to be happy

Devikulam subcollector Sriram Venkitaraman, Sethuraman, IPS, who was born in Munnar, and Merin Joseph, IPS, list the challenges they face and how they pursue happiness. Read detailed story

Want to know if happiness has a gender?

Staying true to your conscience is the ultimate happiness recipe for Merin Joseph IPS #Manoramanewsconclave pic.twitter.com/7QYO9MslHU

The all-woman session of the Manorama News Conclave tried to tug on this thought line that only a woman could decipher. Click to read detailed story

“Everyone has the right to his own opinion,” says Sriram Venkataraman IAS #Manoramanewsconclave 2017 pic.twitter.com/vGahAK2XnO

The development and entrepreneurial aspirations of Kerala is often impeded by local-level factors and lower bureaucracy than by governments. Read for detailed story

Why there is no consensus in drafting a Manifesto for Happiness

Should the governments impose reasonable restrictions on the right of citizens? Politicians agree to disagree. Read detailed story

The internationally acclaimed filmmaker says movies like Baahubali could spoil the healthy cinema culture of the state. Read full story

Political leadership should have a connect with people:  Ravishankar Prasad

Democracy was a great leveler and politics bereft of honest and ethics would not survive, according to the  Union minister for IT and Law. Read detailed story