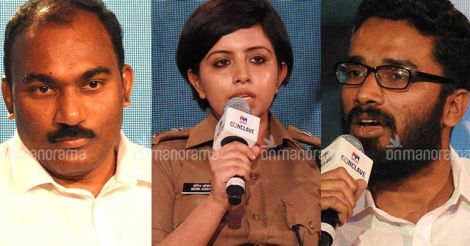 Kochi: Dare to be happy, one of the most-anticipated of sessions at the Malayala Manorama News Conclave here on Saturday, started with a 'cross-linked' query.

Sriram Venkitraman, Devikulam subcollector, who shot to fame with the recent Munnar evictions, was but at ease when he said that the “happiness was inseparable from a decently done job.”

“An officer would not be able to please all. If we stand by our conscience, we can be happy at the end of the day," Merin Joseph, IPS, said.

"Sweeping overnight changes are not possible and I have learnt to find happiness in small things,” she said.

"Happiness need not always be hinging on a peaceful life, The degree of individuality is very low in the civil service. There is absolute clarity on what a civil servant should do," Sriram said.

On the question of conflict of interest and better working freedom for bureaucrats, the officers were united in stating that the political executive and the bureaucracy should act judiciously in the best interests of the state.

The issues have been there for long in Munnar. It cannot be resolved in a day as there are livelihood issues involved, Sriram said.

Sriram said the freedom and the opportunities to work for the people inspired many youngsters to quit lucrative careers and join the civil service.

In the corridors of the civil services academy, a saying goes that a posting in Kerala spells doom. This is a wrong notion, he said.

The civil services of today is totally different from what it was a decade ago. This service is moving towards specialization and probably, the civil services would turn out to be a team of specialists, he said.

Kim Ki-duk: The man who took our breath away

The Malayali’s love for the departed South Korean filmmaker is the stuff legend.