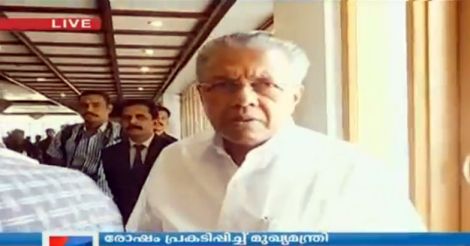 Thiruvananthapuram: In a sudden burst of anger, Kerala chief minister Pinarayi Vijayan shouted at mediapersons and asked them to leave the conference hall of Mascot Hotel here, where he met RSS-BJP leaders to discuss the recent political violence in the state capital. "Who let them in," the angry CM asked the hotel manager, while journalists and cameramen file dout of the room.

The mediapersons were waiting inside the conference room after they were invited to cover the peace meeting called after the murder of an RSS activist in Thiruvananthapuram Saturday night.

Pinarayi along with his party state secretary Kodiyeri Balakrishnan arrived at the hotel as the news television crew were recording visuals there.

How Kerala CM Pinarayi finds peace in a media-free room

Next time, the comrades voice for press freedom,...

Pinarayi first directed his ire towards the manager of the hotel and then while waiting at the entrance of the hall, he asked the media to get out. He was heard saying it a few times.

The CM entered the hall only after all the media personnel had exited.

Traditionally, mediapersons are allowed to take photos and videos inside the conference halls before such meetings begin. They usually leave the room when the discussions start.

The first to arrive at the hotel was state Bharatiya Janata Party president Kummanam Rajasekharan along with his team. Rashtriya Swayamsevak Sangh chief P. Gopalan Kutty was also with him.