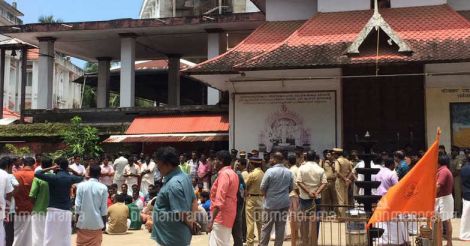 The BJP alleged that the CPM-led LDF government was trying to take over the Parthasarathy temple in Guruvayur on the pretext of irregularities in the administration. Photo: Unni Kottakkal

Guruvayur: Tense situation prevailed at Guruvayur Parthasarathy temple Thursday after devotees protested and prevented an official of Malabar Devaswom Board to take charge at the shrine.

Devotees prevented the official from entering the temple and shut the doors from inside alleging that it was an attempt of the Malabar Devaswom to take over the temple.

The official had reached the temple on the basis of a High Court order, the police said.

Two cases were registered for obstructing the official from doing the duty, the police said, adding the official returned without taking charge in view of the situation.

Meanwhile, the BJP alleged that the CPM-led LDF government was trying to take over the temple on the pretext of irregularities in the temple administration.

BJP state president Kummanam Rajasekharan alleged that the government was attempting to take over Hindu temples on silly grounds and warned that BJP would not remain a mere spectator if steps to harass a particular community continued.

Meanwhile, Hindu Aikya Vedi leader K.P. Sasikala said that believers would not let the temples to be taken over by Devaswom Boards from now on.

"Temple belongs to the believers. It is not for the government to take over religious institutions," she said.