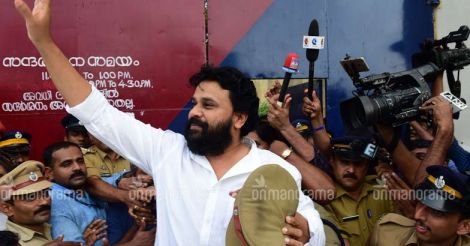 Kochi: After 85 days in the Aluva sub jail, actor Dileep, accused in the February 17 actress attack case, walked out of the jail after the Kerala High Court on Tuesday granted him bail on stringent conditions. Dileep's brother, Anoop, who submitted the release order took him to his house in Aluva.

As news spread that the actor got bail, his fans poured in in large numbers to catch a glimpse of Dileep.

Clad in a white shirt, the actor came out of the jail, and waved to his fans as a gesture of gratitude for their ceaseless support while he was in prison. His car drove away to his home where his mother, actress wife Kavya Madhavan, his daughter and close relatives were waiting to receive him.

Dileep's fans celebrated his release by distributing sweets- much as they do when his films turn out to be blockbusters. Among the cheering crowd was an old woman who was waiting to meet the actor right when she heard the news of his release. “Though I tried to visit him in jail, I couldn't because of the rules. I am here today to catch a glimpse of him,” the woman said. 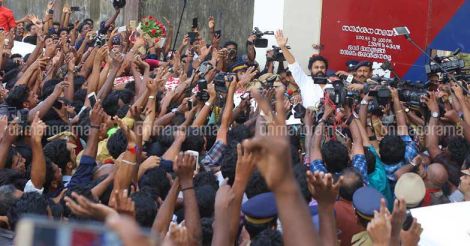 Faced with stiff opposition from the prosecution on granting bail, Dileep's lawyers had told the court that the actor had completely cooperated with the probe and any further detention would be 'unfair and unjust.' The defense harped on to the point that the investigation had progressed 'significantly' and the actor need not be detained for the purpose.

Granting bail, the court said there was 'substantial' change in the 'circumstances' and the actor could be given relief on stringent conditions. The court directed the actor to deposit his passport with the registry, pay up Rs. 1 lakh as surety and produce two personal sureties to secure bail. The court also orally observed that the accused should in no way try to influence witnesses or others involved in the case.

What are the charges against Dileep? Actor's counsel asks in Kerala HC

'We still do not know what are the charges...

After watching Ramaleela in Saritha theater,...

Asked if Dileep getting bail would affect the investigation, Kerala police chief Loknath Behera said that he cannot comment on it. He said he first has to see the court order.

The arguments of the prosecution and defense on the fifth plea by the actor were completed last week and the HC had reserved its orders. Four bail pleas filed by Dileep were earlier rejected - twice each in a magistrate court at Angamaly and the High Court.

The court overruled the prosecution's contention that the granting of bail would adversely affect investigation. However, the counsel for Dileep claimed that the actor was entitled to bail as no evidence was available against him.

Dileep has been lodged in the Aluva sub jail ever since his arrest on July 10.

The police claimed that the conspiracy to abduct and assault the actress in a moving car and videotape the act was hatched by Dileep. Six people, including prime accused Pulsar Suni, were arrested in connection with the actress abduction case.

The actress, who has worked in Tamil and Telugu films, was abducted and assaulted in her car for two hours by the accused, who had forced their way into the vehicle on the night of February 17 and later escaped in a busy area.