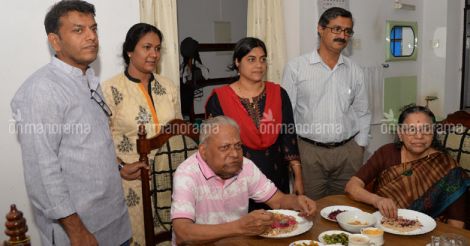 VS celebrating his birthday with family. Photo: Rinku Raj Mattancheriyil

Thiruvananthapuram: CPM veteran and former Kerala chief minister V.S. Achuthanandan celebrated his 94th birthday with family and fans at his residence on Friday.

The much-respected leader, known for his wit and one-liners, cut a cake marking his stride into the 95th year of a life still embossed with the vigor of communist fervor and an undying spirit of struggle.

VS, who is also the chairman of the Administrative Reforms Commission, known for his aversion to pomp and elaborate celebrations, spent his birthday with a limited function and a Kerala sadya. He also treated the visitors and mediapersons to a 'payasam'.

The rise and fall of Achuthanandan

He also received gifts from friends and partymen, including a song about him, gifted to him by Renil Chelambra, a die-hard fan of the seasoned statesman.

Responding to the mediapersons who asked him to comment on the song, VS quipped with a smile, "Good song, isn't it?"

He also had a special message on his birthday, 'defeat the forces threatening the country and the state and march ahead'.

Last year, VS' 93rd birthday was during the assembly session and legislators welcomed him with a thumping on desks when speaker P. Sreeramakrishnan announced his birthday.