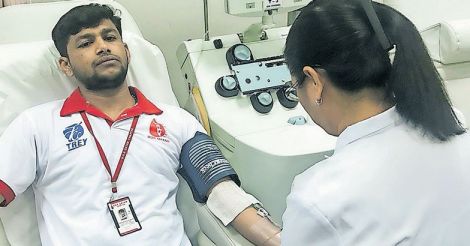 Nidheesh Raghunath, a Keralite who works at Barwa, turned a life saver for a woman in Kuwait when he was identified as a potential donor of the blood type known as Bombay group.

Doha: A pregnant woman with a rare blood group was saved by a hypermarket employee in Qatar who flew to Kuwait to donate blood. Nidheesh Raghunath, a Keralite who works at Barwa, turned a life saver for a woman in Kuwait when he was identified as a potential donor of the blood type known as Bombay group.

The woman from Karnataka had to undergo an urgent C-section which was delayed by the non-availability of a donor with the same blood group which occurs only in four out of every lakh people.

Blood Donors Kerala’s Kuwait chapter was informed about the medical crisis. A social media search for a suitable donor reached the office-bearers of the Blood Donors Kerala-Qatar chapter, which could pick Raghunath from their database. The young man was taken to a hospital for cross-matching of the blood samples.

The BDK-Qatar chapter sought permission from Raghunath’s employers and applied for a visa for the donor. He reached Kuwait on Thursday and donated blood to the woman.

The youngster who hailed from Iritti near Kannur has turned a hero among the expatriates in Kuwait. The health department in Kuwait felicitated the donor from Qatar. He will be felicitated by the Blood Donors Kerala members in Qatar on Saturday.

BDK-Qatar chapter president Shaji Vettukattil said the chain of incidents proved the relevance of a collective of blood donors.