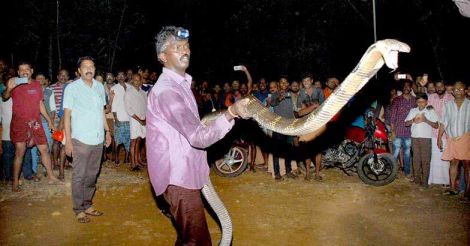 Bettering Hollywood action thrillers, a male and a female King Cobra were out to take each other down the other day in front of the modest but terror-stricken audience of Urukunnu village in Thenmala. Little did the wrathful reptiles know that this is Vava Suresh's own country. Enter the superstar snake catcher. A few swift motions, some deft handiwork - the angry young snakes were inside a sack, reconciled with the presence of a referee on the field.

Late Tuesday evening, a phone call from Thenmala informed the famed snake catcher about the face-off between the King Cobras. The fight had got so nasty that the male cobra attempted to swallow the female. The hair-raising scenes had scared the wits out of onlookers by the time Suresh arrived.

The female had sought shelter among the construction metal heaped up in the compound of a house. The male cobra was in no mood to give up and chased his enemy down. It failed to swallow the female whole, but not for lack of trying. Possibly distracted by the crowd which had heard the angry hissing, the male cobra decided to back off. Releasing the female from its bite, it slithered off into the metal heap. The female wasted no time and disappeared inside a pile of wood. 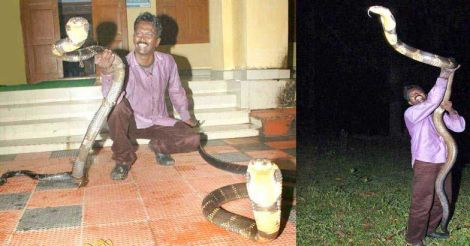 Suresh lured the snakes out, catching both at the same time with his inimitably rapid movements. He said that the roughly 3-year-old female and the 8-year-old male were not mates. The count of King Cobras among the snakes caught by him touched 121 with this encounter, he said. Suresh also scored a hat-trick this time – this is the third pair of snakes that he is catching at the same time.

King Cobras are known to swallow other snakes including pythons. But it is a rare occurrence for it to attempt to devour another cobra. The 14-feet-long male cobra must have got into a tiff with the female when it was sloughed its skin, said Suresh. The female had two bruises on its body, but not major ones, he said. He took the snakes to the forest and released them before bidding adieu to the relieved villagers.