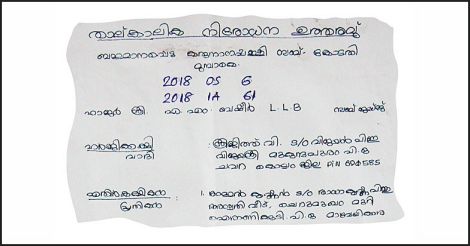 The gag order on Thiruvananthapuram Press Club and media was issued by Karunagappally sub-court judge on a complaint filed by Sreejith Vijayan, Chavara MLA's son.

Thiruvananthapuram: A local court has issued an injunction banning the publishing of news about Sreejith Vijayan, who is facing charges of financial fraud along with CPM state president Kodiyeri Balakrishnan's son Binoy Kodiyeri in Dubai.

Following this, UAE national Ismail Abdullah Al Marsooqi, who has accused Binoy of cheating his company JAAS Tourism LLC in Dubai, canceled a press conference that was to be held on Monday.

Marzooqi said that since both the cases were linked, he may have to speak about matters that are related to Sreejith, son of Chavara MLA Vijayan Pillai, and hence the cancellation. Marzooqi has decided to stay in India till he gets back his money.

The gag order on Thiruvananthapuram Press Club and media was issued by Karunagappally sub-court judge on a complaint filed by Sreejith. A copy of the order was also pasted in front of the Press Club. Though the Press Club said that it hadn't backed out, Marzooqi's advocate informed by Sunday night that the press conference had been canceled.

Marzooqi, who is seeking Rs 13 crore from Binoy and Rs 10 crore from Sreejith, had approached the CPM Politburo requesting it to intervene in the case. Though the CPM state leadership initially denied this and alleged that it was a conspiracy by media, general secretary Sitaram Yechury had confirmed that he had received the complaint.

Sreejith moved the court alleging that Rakhul Krishnan, who is among the complainants along with Marzooqi, had misused his name. It was on this complaint that the court issued the order banning reports, statements or debates on the case.

The notice has been issued to Malayala Manorama, Mathrubhumi, Mangalam, Kerala Kaumudi, Marunadan Malayali, Manorama News, Asianet News, Mathrubhumi News and News 18. The Press Club and Rakhul Krishna too have been named as defendants.

The ban is not applicable to other newspapers and news channels, including Deshabhimani and Kairali.

Marsooqi's lawyer and Uttar Pradesh former additional advocate general Ram Kishor Singh Yadav had approached the Press Club last week, following which a press conference was to be held on Monday at 11.15am.

Recently, the Bombay High Court had lifted restrictions on the reporting of the Sohrabuddin Sheikh fake encounter case, saying the press is the "most powerful watchdog in the Indian democracy" and it “serves the larger purpose of making such information available to the general public."