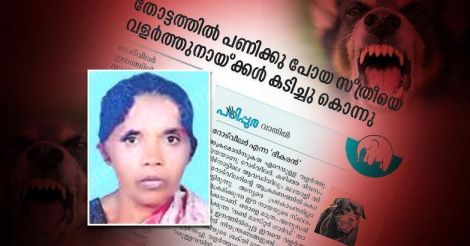 Rajamma who was mauled to death by the dogs owned by Jose, Karickal.

Kalpetta: The owner of two pet dogs that mauled a woman to death on Monday at Vythiri here was arrested on Wednesday. Jose, a native of Karichal, Vythiri, surrendered before the police after he

was booked on charges of homicide. The chief judicial magistrate's court at Kalpetta remanded him to 14 days.

Rajamma, 65, of Ambedkar Charity colony at Vythiri was attacked by two dogs, belonging to the Rottweiler breed, when she was going to her work in the morning.

The police had found that Jose has not attained the necessary license to keep the dogs.

The dogs have been shifted to the veterinary college at Pookkode for medical tests.

Meanwhile, chief minister Pinarayi Vijayan told the state assembly that strict action will be taken against those who leave pet dogs unchained carelessly.

He said the government will consider paying a relief of Rs 5 lakh to the family of Rajama. He was reacting to a submission raised by C K Saseendran MLA.

A sum of Rs 5,000 has been given to the victim's family as an emergency help.