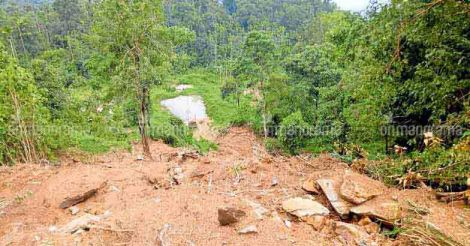 A landslide seen near the water theme park at Kakkadampoyil. The water storage tank is seen below.

Koodaranji, Kozhikode: The management of a water theme park here, owned by CPM legislator PV Anwar at Kakkadampoyil, made a bid to hush up a landslide that occurred near it on Friday night soon after another landslip had killed 14 people at nearby Kattipara Karincholamala. But somehow the matter leaked out and the district collector had to order a temporary closure of the park.

The park managers had prevented visitors from visiting the area where the landslide occurred so that no one came to know about it. However, once the matter became public, the village officer at Koodaranji made inquiries. The collector issued a 'stop' memo on the functioning of the park after the village officer submitted a report.

The officials from the mining and geology department had arrived at the park the other day for inspection but could not complete their job due to fog. They might finish their task and submit a report within two days.

Earlier, Kerala Disaster Management Authority, mining and geology department and the village panchayat had jointly reported that the park was 100% safe and that the area where it is located does not pose any environmental hazards. The panel, presided over by the district collector, had passed on the report to the government.

Local people had blamed an illegal water storage tank for the landslide at Kattipara Karincholamala, where 14 lives were lost.