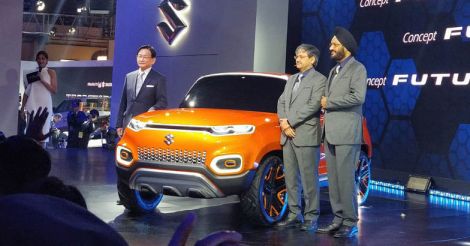 Named ConceptFutureS, the concept is a uniquely styled compact car with distinct SUV like characters and will define the next generation of design for compact vehicles in India.

Named ConceptFutureS, the concept is a uniquely styled compact car with distinct SUV like characters and will define the next generation of design for compact vehicles in India, the company said.

MSI is seeking to tap on increasing preference for utility vehicles in the Indian market.

"Compact is the natural choice of Indias car customers. Compact needs a fresh design language, one that is bold, confident and dynamic. Our designers have created this brand new design, aggressive on the outside, and bold and inviting interiors," Maruti Suzuki India (MSI) managing director & CEO Kenichi Ayukawa said while unveiling the vehicle at the expo.

The Auto Expo will be officially inaugurated tomorrow afternoon and will be open to public from February 9-14.

Ayukawa further said nearly 75 per cent of passenger vehicles bought in India are small and compact vehicles, which are also at the core of MSI's product philosophy and the original Maruti Suzuki mission of a good quality peoples car for India.

Claiming that "nothing like this has ever been attempted before on a vehicle of this size", he further said, if customers like the ConceptFutureS, it has the potential to redefine the next generation of design for compact vehicles in India."

The concept car has an upright stance with higher seating and ground clearance, along with a horizontal hood giving it an urban SUV image, which is strengthened by a bold and upright front.

Commenting on the company's future endeavor, Ayukawa said being the leading automobile manufacturer of the country, MSI would continue to pursue Make in India.

"We are further investing in our R&D center to introduce latest technologies and higher level of localisation," he added.

Ayukawa also said MSI is on course to convert its large portfolio of products to meet BS VI emission standards in time for the advanced deadline of 2020.

On the electric vehicles (EV) front, he said,"I am very happy to share that in line with the governments vision, we will launch our first Electric Vehicle in 2020 in India which will be locally manufactured."

MSI is studying multiple aspects of the electric vehicle ecosystem, to make governments vision of electric mobility a reality, he added.

WCC responds to Vidhu Vincent: We have done our best to stand by the women who reached out to us