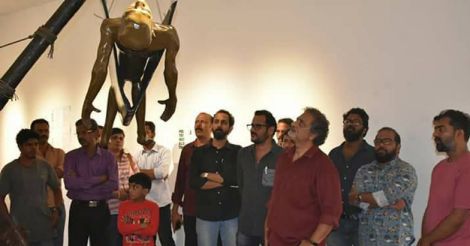 Joy Mathew, Vinod Krishna and other crew members of Poetry Installation with a work on display.

Of the many identities of actor-filmmaker Joy Mathew, that of an expatriate is the lesser known. Mathew’s poems, which he penned during his expat life as a media person in the UAE, invariably reflect the pangs of diaspora life.

Now, a Kochi-based visual artist is exploring the actor’s poems through a medium he has championed – poetry installation.

The poems 'Abra', 'Dera' and 'Rola' are featured in the show, titled as 'Poems of Exile'. The show will be on at Durbar Hall Art Gallery in Ernakulam till Wednesday (The gallery is closed on Mondays).

Krishna, who prefers to model each of his show on a specific theme, chose 'exile' as the key word this time around, and his search for diaspora poems ended up with the works of Mathew.

“I wanted to feature one of these poems in my earlier show, but Joy Mathew said the poem was part of a series,” Krishna says. 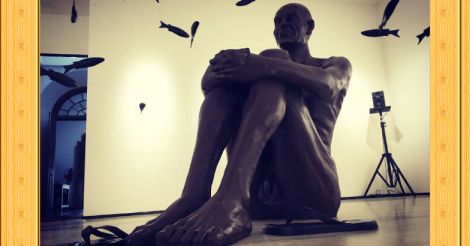 “Abra, Dera and Rola are three places in the UAE, which have crucial roles in the diaspora life there, especially for Keralites. Abra is a gulf where many expats in distress committed suicide while Dera is a coastal town. Rola is a town square where many people who lost their passports used to converge,” he says.

Krishna has his previous year’s team mostly intact for his latest show. National award winning sound recordist Ranganath Ravee, who has associated with Krishna for his three previous shows, handles the recording part this time as well. While Ranganath recorded the sounds from the scenes of the poems live, Nithin Lukose, an FTII alumnae, did the recording on studio.

The poems have been recited by Joy himself. Five sound tracks have been used for the show. “These poems are geographically specific and hence, we thought it's better to capture the actual sounds from the scenes mentioned in the works,” he says. 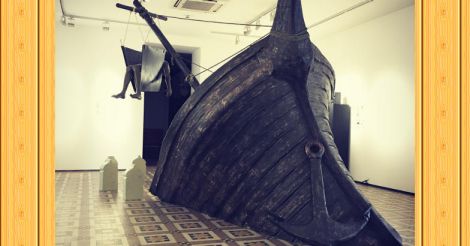 Linu Chakrapani is the art director of the installation. The 3D installations are made of fiber glass in a bid to keep the works more lasting.

The team has plans to exhibit the works in the places where the poems originated. Krishna, who has directed critically-acclaimed film Mayyankalam, is the author of Kannusoothram, a collection of short stories.