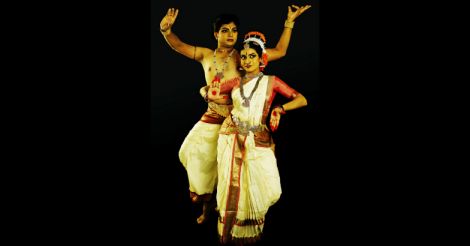 Dancer couple P. Girish Chandra and Devi Girish have carved out their own niche in the field of Kuchipudi

Slowly, yet gracefully she danced her way to the center stage... matching her steps, he too joined her... and as if to complete the perfect frame, a tiny pair of hands and feet traced their footprints as the lights came alive.

That is the Girish family for you - where the man, wife and their 6-year-old daughter, all swear by the hastas and mudras of Kuchipudi.

Dancer couple P. Girish Chandra and Devi Girish have carved out their own niche in the field of Kuchipudi, tracing together a performing career of more than eight years, with more than 15 years as individual performers.

When Devi from Thiruvananthapuram and Girish from Andhra Pradesh found each other and oneself in dance, regional and language barriers did little to keep them apart. The Kuchipudi couple have performed on scores of stages, enthralling thousands of connoisseurs.

They also joined hands to form the Aathmakalpa Dance Ensemble, where they impart training in Kuchipudi, trying to put the spotlight on the little-known nuances of the centuries-old art form.

For most Keralites, Kuchipudi means a solo; at the most, a duet performance. But the art form was originally a dance drama and over the years, evolved into individual performances. And Devi, who pursued her dance dreams in Hyderabad, went back to the roots of the art form and nurtured her passion, all the while drawing in ingredients from the contemporary world. Their first performance as Empanelled artists of the ministry of culture was in Myanmar in August and the audience included Nobel laureate Aung San Suu Kyi.

The couple has gone beyond the kirtanas and incorporated the regional literature in their performance. Most notable of those would be Bhoomikkoru Charamageetham, a dance recital, which is an adaptation of renowned Malayalam poet O.N.V. Kurup’s poem of the same name.

Likewise, the couple used their art to better portray the plight of the downtrodden by incorporating the works of American poet Maya Angelou, Still I Rise, for a performance at the World Women's Congress in 2014.

The couple also made it to the union ministry of culture’s list of empanelled artists, wherein they get to educate the world about India’s indigenous art forms.

Their first performance was in Myanmar this August and the audience included Nobel laureate Aung San Suu Kyi, who walked up the stage to congratulate them after the performance. And the iconic lady was all in praise for the youngest performer of the recital – six-year-old Aathmika, who was an integral part of the dance drama, Arjunah Dasanameeyam.

When Devi from Thiruvananthapuram and Girish from Andhra Pradesh found each other and oneself in dance, regional and language barriers did little to keep them apart

Juggling her time between dance practices, performances, and child-bearing, Devi does a real balancing act. As if her endeavors on stage weren't enough, Devi is also a research fellow in dance at the Hyderabad Central University.

But ask if it's laborious to fulfill so many duties, Devi shrugs it off with a laughter. “I just manage to do it. My parents, in-laws, all chip in when it gets really hectic. Plus, my husband, Girish, is very supportive; we share most of our responsibilities.” 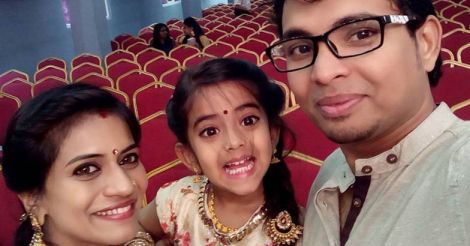 Juggling her time between dance practices, performances, and child-bearing, Devi does a real balancing act

Talk about finding the perfect rhythm in life.