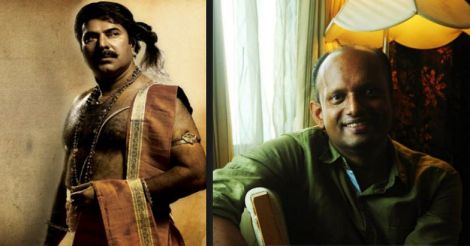 Honor and valor are at stake. The Samoothiri has to be killed at any cost. Nila’s banks are abuzz with frenetic activities. Mamankam, the trade, and cultural extravaganza held once every 12 years is on.

There stands the Samoothiri, swelling with pride, at the Nilapaadu Thara, protected by his trusted band of brave soldiers, watching the Mamankam. The Valluvanad Konathiri’s valiant suicide squad, the ‘chaver pada’ has to break this ring and kill the Samoothiri. It’s a do-or-die battle, with the ‘chavers’ (sworn warriors) opting for death, which to them is sweeter than life.

The years have rolled by. Tippu Sultan’s conquest of Malabar put an end to Mamankam. The stuff of history, one would say.

Cut to the present. The Nila or the Bharathapuzha has changed its course, it’s even disappeared in parts. Nobody wants to be a chaver. But there’s one man, all set to romance history and bring to life the history of Mamankam. Director Sajeev Pillai will turn that stretch of Thirunavaya into a battleground for his upcoming period movie Mamankam, which will reprise the glory of a once-rich tradition, with its accompanying tales of love, valor, and death, minus of course the real gore. The story of Thirunavay’s Mamankam of yore was writ in blood.

This will in all likelihood be one of the most elaborately set stories in Malayalam cinema, with its massive budget and a stellar cast. But the star attraction is evergreen hero Mammootty who will play another “veera vadakkan” role. It’s said that Mammootty will outsmart his earlier Malabari roles of the very sexy Chathiyan Chandu and the brawny Pazhassi Raja.

This time around, he’s a chaver, one among the valiant suicide squad. As the actor himself says, it is one of the biggest roles of his career.

A trip with a mission

Mamankam used to be held only once in 12 years. It’s been 12 years of research and painstaking study for director Sajeev Pillai, for whom the movie is going to be the ritual re-enactment of a rich culture, a tradition, and a way of life that marked the romance of Malabar. Nowhere in the world can one find history that’s so rich in traditions, says Sajeev. Beyond the pomp, splendor, and color, there’s a depth of emotions attached to Mamankam.

Sajeev who was with the Delhi-based Television International left his job and headed back home to dig himself into Mamankam and its rich lore. He’s an ace at handling historical projects. His research into the old Malabar trade fair began in 2,000. He lived for months on end in Thirunavaya and Perinthalmanna, pored over books on the subject and spent long hours with historians. He found time to move around cinema locations too.

As the script and the story inched to a close, the first face to pop up was that of Mammootty’s. The first time Sajeev narrated the story to the megastar was on the sets of Thappana. The final script was read while the actor was doing Bavuttyude Namathil. Sajeev says it was the actor’s solid support that had kept him going this long. The script was registered in 2012. Though it was well appreciated, there were hardly any takers for such a big-budget movie, which was precisely why it had been dragging for years. Things began to look up when producer Venu Kunnappilly stepped in expressing his willingness to fund it.

Almost all the characters are true to history. There are no made-up heroes. The story is also from solid historical facts. There are four other valiant real-life characters too who join Mammootty. An ensemble cast of 70 others also follows, along with a mammoth crowd of players. Kalari is the main motif, which runs all through the movie.

Although the location, characters and the technicians have been finalized, no formal announcements have been made. No details of the budget have been made public either. The film will have the backing of the best artistes. The only snag they are likely to face is the changed course of the once sprawling Bharathpuzha with its sandy banks. Graphics and elaborate sets have also been planned. The stress is to be in real settings instead of fantasy stuff. Though Navodaya happily allowed Sajeev to use the title of its old Prem Nazir-Jayan blockbuster Mamankam, the new movie will bear no similarities with the old one, says the director. He hopes to start filming by February with schedules of up to six. He’s toying with the idea of rehearsal camps before each schedule.