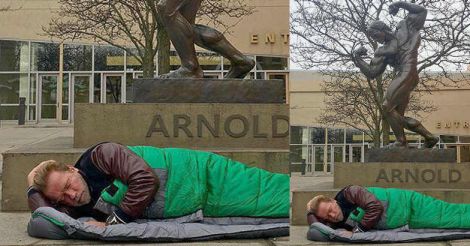 The 'Terminator' star was seen lying in a sleeping bag under his own statue in front of a hotel.

Actor and former California governor Arnold Schwarzenegger has been in the news for some odd reasons. A recent photo of the former Mr. Universe sleeping under his own statue has been doing the rounds on social media. The photo was posted by Arnold himself with a note 'how times have changed... '

He is said to have written the words in anguish after he was denied a room in the hotel he had inaugurated years ago as the governor of California. The hotel also had a statue of Arnold on the frontage.

The staff of the hotel had also told Arnold that there would be always a room reserved for him whenever he needed. But when he stepped down as governor and went to the hotel, the administration refused to give him a room saying that he should pay for it, since the demand was high.

The Terminator star then brought a sleeping bag and decided to sleep in it under the statue to convey the message that when he was in an important position, the hotel complimented him, and when he lost this, they forgot him and did not keep their promise.

"Do not trust your position or the amount of money you have, nor your power, nor your intelligence, it will not last," Arnold said.