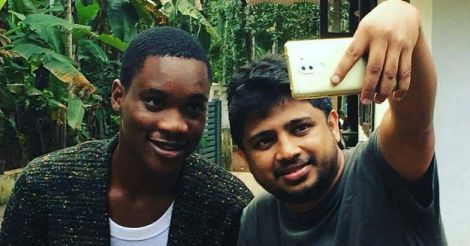 Regarding allegation of racism the producers said it was painful to them. Samuel Abiola Robinson (L) with director Zakariya.

Post Samuel Abiola Robinson's allegations of underpayment and racism, after his successful outing in the Malayalam movie, Sudani from Nigeria, its producers have come forward to make their stand clear on the issue.

Happy Hours Entertainments, helmed by Sameer Thahir and Shyju Khalid, has made an official statement on its Facebook page refuting Samuel's claims.

The producers said the Nigerian actor was given a clear picture of the 'low-budget nature of the film' and about the 'limit of remuneration.'

'Sudani' hits out at film producers over 'racial discrimination'

They also maintained that Robinson had entered the contract after 'he agreed on paper on the remuneration' and that Samuel was given a 'mutually agreed' remuneration.

“After the film became commercially successful, we shared with him the hope that everyone who is part of the film will have a share of that happiness,” the producers wrote on the Facebook post.

“But it is equally true that a share of the profit would not reach us until due course of time elapses and unless the usual procedures in the film industry are completed,” they wrote.

Regarding allegation of racism the producers said it was painful to them. 'It is distressing and a cause of self-contempt' for them that racist undertones were attributed to the underpayment claims.

The producers, however, concluded the post in the hope that Samuel would correct his mistakes and resume the friendship with them.

KGF makers announce yet another pan-Indian film for 2021

Reports are also rife that a superstar has been roped ion to play the lead role.