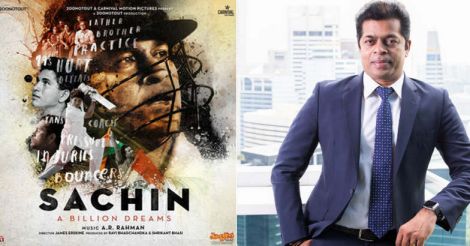 ‘Sachin: A Billion Dreams,’ the docu-drama based on cricketing legend Sachin Tendulkar has been the subject of euphoric headlines ever since it hit theaters. But not many people know that the James Erskine movie was co-produced by a Malayali – Shrikant Bhasi of Carnival Motion Pictures.

An enterprising business magnate, Bhasi, who was born and brought up in Bhopal, has his roots in Angamali – a small town close to Kochi in Kerala. His business empire comprises film exhibition, production and distribution to food, realty and hospitality businesses, to name a few. Here, Bhasi shares with Onmanorama a few tidbits about the much talked about movie on the master blaster.

Read review of the movie here

How did the concept of 'Sachin: A Billion Dreams' take shape?

It was initiated from Sachin Tendulkar's office. One of Tendukar's friends wanted to make a movie on him and since we being in the movie business, approached us. But before striking a deal, we wanted to ensure whether Tendulkar himself was willing to have such a movie. So we met up with Sachin. We found that he was very keen to pass on his cricketing experience to the younger generations. We realized that the movie won’t do justice until and unless Tendulkar himself appeared on screen, talked and presented things. That's how the entire thing originated.

It is more of a docu-drama than a biopic. So, what were the challenges you faced during its making and the release?

The process of the Sachin movie had started about four years ago. It is a docu drama. So when we talked about it first, people were apprehensive about its prospects in the market. They were concerned how it would fare amid other big budget commercial flicks. But as we neared its completion, theater owners, distributors and the market on the whole started responding positively. Thus, the main challenge was over when people people started realizing that it was a movie of two hours and 20 minutes and that there were lots of lessons to be learnt from it. But the real challenge was something else. The movie was based on real life moments and there were 10,000 hours of video clippings. Making a movie by selecting the most relevant parts out them was really a leviathan task.

How confident were you to pull it off when each and every vital moment in Sachin's cricketing career is well-etched in the memory of India’s cricket fans?

Sachin is considered as the God of cricket. A.R. Rahman did the music for the film. So I was confident that when the God of cricket and the God of music come together in one platform, it would never go wrong. That was like the best combination one can ever have.

How do you evaluate Tendulkar's enthusiasm for the project?

Talking about his enthusiasm, I would say that Sachin must have seen the movie about a 100 times and every time, he would have some inputs to share. And each time he gave those inputs, he would ask himself: “Am I giving something, which could be useful to the people?” He wanted the people, especially the younger generation, to learn how he grew from an ordinary person to a Bharat Ratna. He was very clear in that. He was thus, fully involved in the project.

The cash registers at the box office are still ringing. What is the gross revenue the movie has earned so far?

The revenue has touched Rs 65 to 68 crore and the movie is still running to packed houses. We have almost 1.000 plus screens across the globe. In fact, we are not looking for any number. We are thinking that the schools have just reopened that the children should be watching the movie.

Now that the film is a success, any plan for similar biopics in future?

Yes, after Sachin, we have been getting a lot of offers. We have a well experienced team to evaluate the projects. Talks are on with a couple of teams for making similar sort of projects. We are into multiplex business and are one of the largest in terms of the geographical reach. In terms of number too, we are going to be the largest by 2018.

How much of the literary and aesthetic values appeal to you while choosing a film?

(Value) It's very important for us because we are here for a long term. We produce movies, which has got some value. There are many movies, which are aesthetically dud but have great commercial value. In principle, we'll not go for it. We have certain check and measures, which we consider while shortlisting a movie.

What are the other film projects in the pipeline?

We are planning worldwide distribution of upcoming Malayalam movie E – a production by Sangeeth Sivan and Surani Pictures. It's Goutami's come back film and will be released on August 11. Besides, we have some untitled movies in Malayalam, Marathi and also in Hindi. Five to six projects are in the pipeline right now.

How are you connected to Kerala and do you have any plans to produce a film in Malayalam?

I am a Malayali and wherever I go, I identify myself as a Malayalai. My native place is Angamali. So I always keep a watch on the town. I make sure that I visit Angamali at least twice a month to get the oxygen of that place. And of course, we'll be doing films in Malayalam.