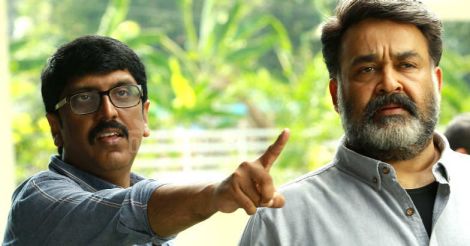 It was Iago, the Shakespearean villain, who mesmerized B. Unnikrishnan, for his ruthless plots and spiteful jealousy. The infamous lines of Iago that he cannot stand anything that is beautiful, peaceful and happy; and cannot help but destroy it remained engraved in the director’s mind forever. Unnikrishnan says that it was from Iago and his vexing villainy that the plot of his latest crime thriller unfolded. The director reunites with superstar Mohanlal after three and a half years with the upcoming big budget movie Villain, which is slated to hit the screens on October 27.

Unnikrishnan never had any apprehensions about the title of the movie. But when he approached Mohanlal for the first time with the story of Villain, the actor was a little skeptical. Later, the director met Mohanlal with a detailed screenplay sans the dialogues and the draft impressed the actor. He said there indeed was an exciting element in the story and hoped that there is ample scope for him to deliver a power packed performance. He even wholeheartedly approved of the title he was apprehensive about.

An excited Unnikrishnan said, “There will always be an element of mystery in every noble work, be it a piece of art or a book. Villain too has that element of mystery. I was always fascinated by thriller movies and detective fiction.”

Villain embraces the technological leapfrogs that have happened in cinema to bring on reel all its beauty. The movie has been entirely shot in the Helium series of Red camera in the 8K resolutions. Cinematographer Manoj Paramahamsa assures a unique visual treat when these shots are transformed into 4K or 2K. Manoj began his stint in the movies assisting Unnikrishnan in the movie Smart City before turning cinematographer for movies like Vinnaithandi Varuvaya and Nanban.

Unnikrishnan’s ambitious project is in fact a culmination of a few experiments that have been happening for the past two years to introduce the technological advancements in cinema without distracting the attention of the audience.

Meanwhile, twin brothers Ram and Lakshman, the action-choreographer duo, who directed stunt sequences in some of the major hits in Telugu cinema, will enthrall the videos with some power-packed action. Rockline Venkatesh who hit a jackpot in Bollywood with Bajrangi Bhaijan is the producer of Villain.

Apparently, this is time Unnikrikrishnan and Mohanlal are coming together for a movie. Apart from Mohanlal, Villain features some heavyweights from the Southern industry like Tamil actors Vishal and Hansika who are equally excited to be a part of a Malayalm movie for the first time.

The movie, which will be released in Tamil and Telugu shortly, was shot on a whopping 20 crore budget and had set a few records in its pre-release business as well. Villain had already garnered 7 crore rupees as satellite rights in Malayalam and 3 crore in Hindi. The overseas exhibition rights of the movie were sold for two and a half crore rupees.

Manju Warrier plays the female lead opposite Mohanla’s protagonist Mathew Manjooran in Villain. Sidhique, Ranji Panicker, Chemban Vinod Jose, Srikant, Irshad, Balaji, Sanju, Razi Khanna, Shafique, Anas and Athira Patel play pivotal roles in the movie. While the music is by Four Frames, songs are written by Hari Narayananan and Manu Manjith. Manoj Paramahamsa, and Ekambaram have wielded the camera. The editing is by Shameer Muhammed. The movie will be released by Maxlab Release.