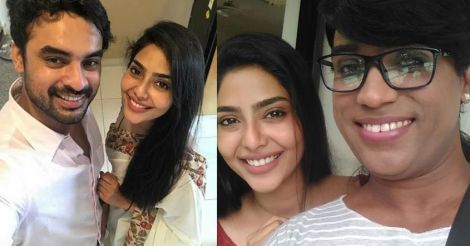 “It doesn’t feel like I have acted in 'Mayaanadhi' because the character was so close to my real life. ,” says Abeel.

The extraordinary journey from Kannamaly, a coastal village to the silver screen was no easy fete for Abeel Robin. He played the role of a makeup artist in Aashiq Abu’s latest Mayaanadhi and the character was no less of a reflection of Abeel’s life itself.

Though the character had less screen time, it marked a strong presence in the movie. Abeel’s role in Mayaanadhi has broken the typecast transgender characters, often cast mockingly Malayalam cinema.

Abeel talks about his hopes, dreams and also about the politics of oppression prevalent in our society, to manoramanews.com

Acting was indeed one of my many dreams, but I never imagined it would come true one day. I started my career as a makeup artist. Later, I landed in the makeup department in films. It was in the movie Lukka Chuppi that I began my journey as a makeup artist in films. I’ve been in this field for the last three years. It doesn’t feel like I have acted in Mayaanadhi because the character was so close to my real life. I was able to get into skin of the character effortlessly, as I too wish to continue as a costume designer.

It was through Benny Kattapana that landed the role in Mayanadhi. Benny is my Facebook friend so he has seen almost all my works. So one day he said, “There is this character in Aashiq Abu’s Mayaanadhi. Can you do it?” I met Aashiq then and got cast in the movie. I did exactly what he asked me to do. I am very happy after the release of the film because people liked my character and I got noticed.

In the beginning I wanted to be known as a singer. I have a feminine voice. Though I like to associate with women more, I trained hard to change my voice to sound more like a man. I have trained in Carnatic music for seven years besides learning Hindustani for two more years. I was a member of a music band which was based in Andheri in Mumbai. I still sing at orchestras and regularly conduct gazal concerts. I pen lines for music albums besides composing and singing in it. So it is with music that I am closely connected.

I like to be known as a complete fashion designer. But I don’t really get bored even if I try my hands at other jobs as well. Music, acting and designing are all part of my life. I even conducted a fashion show in Kochi all by myself. I design costumes and do makeup at the same time and commit bridal makeovers as well. It is I who oversee everything about my work, but I am a little disappointed that I can’t bring it to the people and make it more popular in the way I wish it to be.

I have gone through all the struggles and unpleasant experiences as a transgender. As a kid, I was too scared to attend classes at school because I was mocked there for what I am. After my mother passed away, the situation at home turned worse and I was forced me to leave my house. But I was able to move forward with confidence even when I was alone.

I decided to have faith on my talents and focus on them to be strong in the society, because if you decide to stay in oblivion then your life too would end up in darkness. I have carved a niche in this society as a human being rather than a transgender person. I faced the challenges and crises all by myself. I strongly believe that success will embrace those who dare to dream. The attitude towards the transgender people should certainly change. More than the general public, it is the outlook of the authority or people wielding power that should be altered. I think the common people have become more aware about our plight these days. It is extremely painful to see the authorities taking a cruel and antagonistic stand against the transgenders in Kerala. I just have a request to the authorities to consider us as human beings.

Samantha heaps praises on Soorarai Pottru, calls it film of the year

Samantha recently watched the film and took to her social media pages to share a few words about the movie.