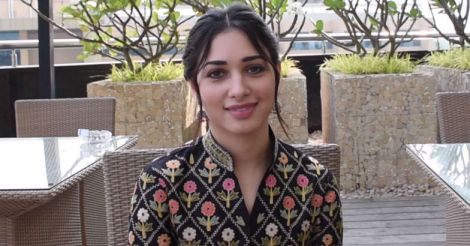 Tamannaah plays the role of Amudhavalli, a typical Tamil Brahmin, in the film.

As the Chiyaan Vikram-starrer Sketch is running in the theaters, Tamannaah, who is the female lead in the film, says that the movie is a wayward juxtaposition of the coarse and the gentle. “A melting love story that the industry has long been waiting for. The union of two legendary talents, Vikram and Vijay Chandar will doubtlessly be an amazing experience,” she told Onmanorama in an interview.

Your character in 'Sketch'?

My character's name is Amudhavalli aka Amu. Amu is a very gentle, caring and tender village girl. Unlike the bold character I have done in Bahubali, Amudhavalli is a typical Tamil Brahmin girl who is very traditional yet a strong person.

Experience of acting with Chiyaan Vikram?

Vikram is one of the most supportive and energetic actors I have ever worked with. He has a very high level of enthusiasm in him and is literally an energy capsule. He has a really amusing way of transforming himself into the character and back, within seconds. I think every co-artist develops a comfort zone with Vikram within the first few days which makes the work effortless and easy. He cracks jokes, mocks and cheers up the whole set. I think I have lived some valuable days in terms of experience during the shooting schedule of Sketch.

Association with director Vijay Chandar who is a beginner himself

Vijay Chandar is a silent performer in his realm. He has crystal-clear views about his work and has an unshakable will. He is a humble soul who speaks very less and works more. He has an insight for his movies and the industry in general. Vijay Chandar is truly an actor's director.

What distinguishes Sketch from the many love stories we've watched?

The romance portrayed in this movie is very much different from the conventional love stories we've been watching. The romance between Sketch and Amudhavalli is natural. A strong bond more than bare love has come out perfectly in a couple of scenes, which, I am sure will melt the audience's heart. I wouldn't urge the public to throng the theaters expecting a blockbuster but if you really miss an experience of pure love filling your heart and soul, Sketch will impress you.

I have signed up for a couple of films recently, one of them being a Telugu movie called Naa Nuvve with Nandamuri Kalyan Ram. I am also there in the Telugu remake of Queen. I have signed a project with Seenu Ramaswamy starring Udayanidhi Stalin. More than the upcoming projects I have a series of releases coming up this year, of a number of movies I worked in during last year. Kunal Kohli's film with Sundeep Kishan is the prominent among them.