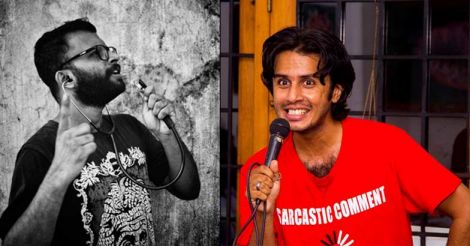 Onmanorama (OM): Why is that the ratio of female stand-up comedians to their male counterparts disproportionately low?

Vinay Menon: I won't deny that it doesn't exist at all. Through out history we have seen it across all art forms. During the time of Shakespeare, participation of women in theatre was akin to prostitution. Female roles were done by men who used to dress up as women. But times change and women today are now a part of arts just as much as men. India is definitely a few hundred years behind (as in everything else!!) We are still very judgmental about the same. For female stand-up comics, it's double the judgment -- you get judged for being a comic and for being a women. There does exist a certain level of discrimination in society which could possibly translate into stand-up comedy.

OM: How do you prepare your content? Do you keep tabs on other comedians out there or do you try to scratch your brain as hard as possible for fresh content always? How involved are you in your video creation and other technical aspects of your work?

Vinay: Very much. I do my own shooting, editing and all other stuff for my videos. I believe a comedian should be so. For example Sumukhi Suresh and Naveen Richards in their Amazon prime series 'Pushpavalli' (which is incidentally based on a true story) were deeply involved in the writing and production processes. So they know what and how to perform in front of the camera. Other examples would be of legendary Japanese filmmaker Akira Kurosawa and American Quentin Tarantino. Akira was involved in the writing, editing and direction of his work. Content creation is about self-reflection and I do not have any dedicated hours or sweet spots. I look back and find something funny that has happened in my life and I pen it down.

George Vivian Paul: Preparing content is by far the most difficult task for a comedian. It is very much like a PhD thesis. Every aspect of the joke must be something that the people have not heard of. The surprise in the jokes is what brings the laughter. Though difficult, it is not impossible. Many funny thoughts come to us on a daily basis. I note them down, try them out in an open-mic. If the audience approves the joke then I add it to the set and build it up. Perform the set in front of the mirror till the person in the mirror is so funny that you would buy tickets to watch that performance. Refine the jokes as you go and repeat the process.

OM: There is no comedy when you don't pull other people's legs. Do you agree with the statement ?

George: Comedy by default targets any and all who have power. The point of it is to break the grand delusion of all of it. It never works if you make fun of a poor man's fate in life. Offending someone is never the comedians intention. Pulling someone's legs is fun and people getting offended are in plenty. Also it is highly unlikely that every single one in the audience agrees with each and everything you say. So both the audience and the performer should take it with a pinch of salt.

OM: How original do you think original content is?

Vinay: I don't believe there exists something called purely original content. Sometime ago when I was helping out Aravind SA with his 'Madrasi Da' script I realised that Aravind's jokes can only be said by Aravind alone. Each comedian has his own individual style and that cannot be copied. Copied jokes don't work. I recollect hosting an open-mic show wherein most of the comedians ripped jokes from Aravind SA, Karthik Kumar and Kenny Sebastian. But they simply bombed. However, comedy is inspirational, you make jokes out of your own experiences which are most probably them same for everyone else and hence are relatable.

OM: Do you think a comedian is somebody with a social responsibility?

George: Humour can give a fresh perspective to topics with irrefutable baggage like rape, collapse of a bridge, the rot in the educational institutes as well as terrorist and Maoist attacks. The trick is to tread the line very carefully. Mostly it is not the fault of the audience but the failure of the comedian to clearly put their idea forth. A comedian is like a modern-day jester. They present the common man's point of view, and people are sensitive, hence the onus is on the comedian. But then again the comedian is responsible for what they speak, not what the audience hears.

OM: Do you think there does exist a North-South divide between stand-up comedians? Like how segregated is the market on linguistic bases?

Vinay: Definitely it is there. It's because of the differences in cultural history and tradition. I personally might not find Kapil Sharma funny, its not because he is not funny, its because I wouldn't get the nuances of Hindi. I simply fail to relate to him. English on the other hand is an entirely different ball game altogether. It might be considered elitist by small towns but it happens to be the standard in south India. Most south Indian comics use English as a standard. There does exist a language barrier, but than taking it seriously I think it should be made fun of.

Vinay: Well for interested comics out there who have had a few open-mic experiences, remember you are not as funny as you think. If you think you aren't funny, then maybe you have a chance for learning and growth. Keep trying out your content in as many as open-mic avenues as possible, perfect your script by practice. The growth in the initial years is always slow, it will take time before people pay to see you perform. But get a regular job, don't jump into the field of stand-up comedy. It is uncertain and it takes time to get noticed. Not everyone sells too. Kochi has tremendous potential. But what Kochi might attain in the next 5 years, Bangalore might have already done so 10 years before. Through prospects are good, growth is slow.

George: Stand-up comedy will find it hard to carve out a space in the cultural environment of Kerala, but will definitely happen eventually. Anyone interested in getting into stand-up should start by taking part in numerous open-mics. All you need to realise is the worst-case scenario that can happen then while you are on stage is that people will stare at you silently. When I started the club (Kochin Komedians) people were confused between stand up comedy with mimicry, stage show, mono-act and many other art forms. Although it has not changed much things have definitely gotten better. People are little more aware of stand-up comedy than before. As far as comedy is concerned Kerala is like Switzerland. As long as you can make people laugh you can basically joke about anything. The same cannot be said about the rest of the country.