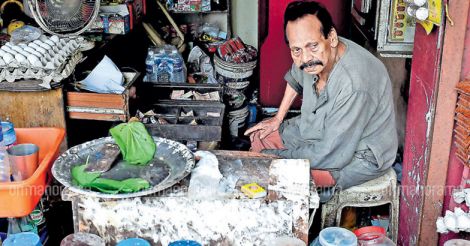 KTS Padannayil opens up to Onmanorama regarding his life, struggles, and career in the wake of his new, multiple award-winning short film 'Mathayiyude Namathil.'

A helpless smile welcomes customers to No 601 corner shop at Thrippunithura in Ernakulam district. The face behind the cigarette packets, beetle leaves and periodicals hung on an overhead string looks familiar. KTS Padannayil, a veteran Malayalam movie and theatre actor, could be easily recognised by nothing else but his various shades of smiles. No Malayali movie lover can forget the funny patriarch in 'Aniyan Bava Chettan Bava,' who gets confused about who's son is who. His characters in 'Dilliwala Rajakumaran' (1996,) 'Vriddhanmaare Sookshikkuka' (1995) and 'Sreekrishnapurathe Nakshathrathilakkam' (1998) arouse loud laughter in Malayali's living rooms even after two decades. His toothless laughter is etched in the minds of movie buffs, though he was type-cast to minor comedian roles.

Kochupadannayil Thayi Subrahmanian, aka KTS Padannayil, opens up to Onmanorama regarding his life, struggles, and career in the wake of his new, multiple award-winning short film 'Mathayiyude Namathil,' which gained him a best actor award from the jury of KPAC International Short Film Festival. This was indeed a late recognition that made this 85-year-old actor proud.

Adversities taught Padannayil to stand on his feet. The man, who made his acting debut seven decades ago, runs a pan shop to earn his living as the minor roles he did in cinemas couldn't fetch big cash. After all, he had debuted in cinema in his late fifties. The man, who made his acting debut seven decades ago, runs a pan shop to earn his living as the minor roles he did in cinemas couldn't fetch big cash.

“I have never been a liability to my family. At the age of 10, when I found my mother struggling to make Rs 1.50 to pay my examination fee, I quit school and started doing daily-wage jobs. Back in 1970, I foresaw the fall of theatre in Kerala. I bought this small corner shop-room for Rs 600 from an acquaintance and stacked it with commodities worth Rs 400. My investment for a sustainable livelihood and self-dependence was Rs 1,000,” Padannayil proudly said.

Till a couple of years ago, Padannayil would rise before sun and walk more than two kilometers with big bags full of betel leaves and cigarette packets to serve lorry drivers who venture out on early-morning trips. He would then purchase his share of periodicals from the local agent and hang them aesthetically in front of his shop. The school children who pick disposable ball pens in a hurry, morning-walkers who select their usual newspaper and rickshaw drivers who start their day with a strong betel mix are some of the regular clients of this old shopkeeper.

“My son Shyam looks after the shop whenever I am away on shoots. Eldest of the four, he is entitled to take care of my shop and the house which I build with my meagre savings. For me, acting is more of a passion than a profession. That is one reason I didn't earn anything from such a long career. I know that soon people will stop calling me for the typified roles which I keep on getting in cinema. Age is bothering my health. I shall keep my shop open till my last breath,” the avid actor expressed his intent. 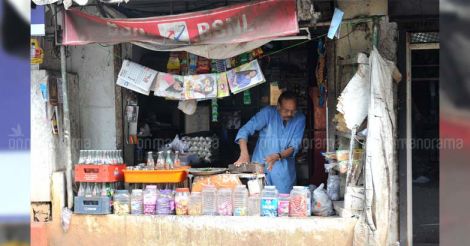 "Age is bothering my health. I shall keep my shop open till my last breath,” the avid actor expressed his intent.

Padannayil was born as the youngest of six children of Thayi, a percussion artist, and Mani, a daily-wage worker. A little Subrahmanian suppressed his fancies of a full stomach's meal and timely paid school fees, knowing his parents' struggles. “I remember the time when we starved for more than three days consecutively. Myself and my immediate elder brother used to roast cashew nuts and eat its tiny seeds to satisfy our hunger,” he revealed.

After dropping out from school, he joined his friends to count stinky coconut husks at a coir factory and to check wool in a spinning mill. It was during the anniversary celebrations of that old spin mill, the talented actor in Subrahmanian was first revealed.

“I knocked the doors of almost all theatre troupes in and around Kochi after that. All of them neglected me for my poor educational background and inefficiency to deliver dialogues written in print. Back then, only two accents were accepted on stage: one, the much familiar namboothiri or zamindar accent, and two, a typical print-styled dialogue. I spoke in a common man's accent. I was sure that my character would communicate well with audience if I speak in their style. Yet, it took years for me to get a chance in a drama,” he said.

Though the actor doesn't remember the name of the first play he acted in, he has a clear account of his dialogues. Padannayil, like a smart parakeet, pronounces his dialogues from the 1947 play, doubtlessly with all facial expressions. “Now that is something special about actors hailing from theatre background. You tell me the name of a movie I acted in and I shall deliver all my dialogues in that movie,” Padannayil boasted. Well, the game did last for another 15 minutes. 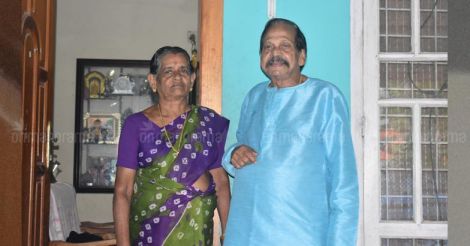 Padannayil and his wife Ramani in front of their house.

He married Ramani, now 72, back in 1968. The couple has four children, Shyam, Sannan, Saljith and Swapna.

The actor regrets his failure to land a memorable role in movies and blamed stereotyping for his unenvious role in Malayalam industry.

“I admit my sorrow of not being able to do a powerful character in Malayalam cinema. Typecasting is a curse cast on our industry. Once you excel as a policeman, you will barely get a chance to remove that uniform. That is what happened with me and my dental implant,” Padannayil narrates his story of getting typecast even though he had made a mark for acting with subtle naturalism.

“Aniyan Bava Chettan Bava (1995) was my first movie. I acted as the great-grandfather who saw three succeeding generations in the comedy film. After my first sequence was shot successfully, I met director Rajasenan in person and asked him to retake the scene. Before a confused director, I removed my dentures and revealed my bare gums. An overjoyed Rajasenan soon reshot the sequence and later shot the entire movie with a toothless me. I don't remember any role as a toothed man afterwards.” The actor regrets his failure to land a memorable role in movies and blamed stereotyping for his unenvious role in Malayalam industry.

Padannayil still nurtures his ambitions of essaying a powerful character in Malayalam cinema. “I have always loved to perform the role of people who experience immense agonies and emotional conflicts. As I have been typecast as an old comedian, I don't foresee any good role, though I wish young filmmakers who rediscover old talents these days may spring a surprise,” he noted wistfully.

Speaking on the pathetic acting standards, the disillusioned actor stated that ordinary actors seldom get a glance of the script while it would be read fully to the lead actors at long overnight sessions long before the shooting schedule starts.

“Every actor is equally important for a movie. If it is a dialogue between myself and Mohanlal, the latter can respond only if I emote my part well. But the assistant directors, who keep the script with them day in and day out, would explain the scene to me or any other ordinary actor after the camera is ready to roll. Now how do you expect an actor to emote a scene without knowing its previous sequence?! Most actors deliver substandard performances these days and live and die as 'juniors' because of this,” he remarked. In the twilight of his life, Padannayil has a few dreams and many sorrows that keep him engaged. One among his pains is about his unsound youngest son. “I literally struggled to settle my children down but one of them lacked enough fortune to understand and live a good life. I am indeed bitter about his fate even as I realise the sad fact that I am not lucky enough to get fairly paid for my efforts – be it in cinema, theatre or life,” he said.

Padannayil recounted his bitter experience of acting for 28 consecutive days in a movie and receiving a pay of less than Rs 10,000. “Cinema is a world of fame and glamour. It is more of a business than an art form. No one looks at your talent and calibre,” he said.

His intimate friends in the industry, like Oduvil Unnikrishnan, are long gone. Padannayil shares his signature laughter as he recounts the moments he shared with yesteryear actors, the long overnight chats over a bottle of rum or fine whiskey. “Oduvil was one of a kind. I was left behind to watch these changing times, just because I forgot to develop an addiction in my golden times. It could be money, alcohol or fame, all addictions are fatal,” Padannayil heaved a sigh. 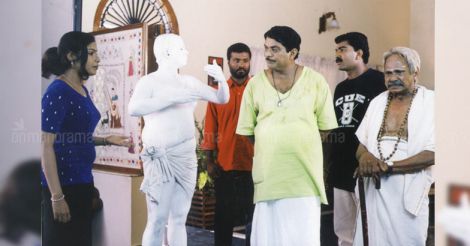 Having acted in more than 140 movies, Padannayil is not even remembered by his real name. “Haha.. Subrahmanian was too popular a name during my childhood. There were over six Subrahmanians in our class. It was Kurian master, who taught mathematics in LP school, started calling me by my house name. At times, I myself forget my real name,” he guffawed.