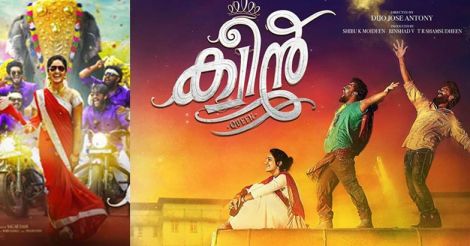 The director comes up with a cast of newbies who do complete justice to their roles.

'Queen', the debut work by director Dijo Jose Antony, presents quite a few contemporary issues in a titillating cinematic wrap.

The well-written and flawless script zooms in on the value and worth of friendship rather than love. The film presents the life of a young girl who joins mechanical engineering, a stream considered 'all-boys.'

The film progresses through good humour and Dijo's craft betrays his inexperience Apart from a few experienced actors, it is an all-new cast and the maker has extracted the best out of all.

The film holds a surprise mid-way and works with a collective of protagonists rather than a hero. The lead cast includes Saniya Iyappan, Eldho, Dhruvan, Arun, Ashwin etc.

The female lead in the film, Saniya impresses the audience with her charm. The senior actors include Salim Kumar, Vijayraghavan, Sreejith Ravi and Niyas Backer.

The frames by cinematographer Suresh Gopi are crisp. The youth-centric film, written by Sharis Mohammed and Jebin Joseph Antony, is a breeze to watch. The music by Jakes Bejoy is peppy and goes well with the youth theme.