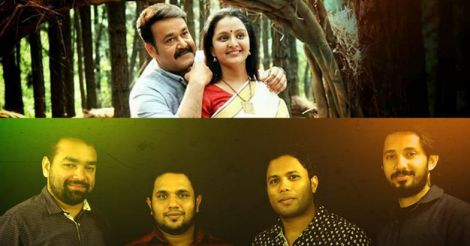 The songs in Villain are composed by 4 Musics, the four-member team who scored the music for Mohanlal’s Oppam

Mohanlal fans are raising a toast to the season. The actor seems to be making all the right moves these days, gracing the screen with enviable ease. While the world is still grooving to 'Jimikki kammal', fans are already drooling over the first looks of Odiyan and Villain. If there is one line that says it all about the actor’s pick of roles this season, it is this one from Villain – 'every hero has a villain in him and every villan, a hero’ (ella nayakanilum oru villain undu, ella villainmarilum oru nayakanum). The actor’s delivery of the punch dialogue has gone viral on the internet and so has the salt and pepper look he dons in the upcoming fantasy thriller.

The songs in Villain, composed by 4 Musics, the four-member team who scored the music for Mohanlal’s Oppam, have already garnered the attention of music lovers. The music rights of the five tracks were sold for a record Rs 50 lakh to the label Junglee Music. The audio rights of Malayalam movie songs usually fetch a maximum of Rs15 lakhs. The dubbing rights of the songs were bought for a whopping Rs 1 crore.

The movie has a mix of melodious and fast numbers. But then all of them have lines that are simple and lyrical, thanks to B.K. Harinarayanan. There’s something for everyone – from fire of emotions to delicious tinge of sweet sorrow.

The evergreen voice of K.J. Yesudas does not fail to steal our hearts as it brings alive the melody:

A delicately worded tale of love and longing, the song captures the insatiable yearning of the lovers’ hearts for each other. The lyrics and the voice of Yesudas weave a magic. He sings, in that inimitable voice, of a beloved face that lights up like the twilight sky -

Haritha Balakrishnan is no less a delight to listen to as she croons the slow paced melody, ''Pathiye nee vannuvo… aazhangal pulkumo''. Her rendering of the lines has the power to evoke a gentle knock by love on the doors of your heart.

'Angakale Chenkathiranaye' is sung by Sakthisree Gopalan and Niranjan Suresh. The song has an edgy rawness about it which comes out beautifully in the voice of Sakthrisree.

Apart from the record breaking price paid for its audio rights, the movie has another first to its credit. It will be the first Malayalam movie to be completely filmed and released in 8k resolution. (Here’s some funda - if you want something to compare that to - Baahubali was shot in 4k resolution which was a first in India!). Helium 8k camera, which belongs to the Weapon series of RED, was used for shooting the movie, which promises to be high on the technology quotient. Meanwhile, plug on to the tracks which are already trending.